When it comes to term games, people imagine video game they played when growing up or desk game that they spend time playing with their friends. However, there is another not so popularly known side to this term. Serious games represent a field of games that can be defined as any kind of initiative that is based on a game. Primary purpose of serious games is to educate while playing whereas in normal games players tend to have fun in the first place. Different sources state that modern era of serious games began in 1960s and 1970s. With technology development new and more innovative types of serious games were created. Such games can be used for various educational purposes as they tend to be more attractive than classis linear form of learning. To illustrate this term by example, Microsoft Flight Simulator can be mentioned as it is believed to be one of the most influential serious game in history of mankind.

To begin with very first games that had somewhat educational aspect to them Dice must be mentioned. This game first appeared in India more than 40,000BC and younger version can be found in Iran around 3,000BC. Xiangqi, also known as Chinese chess, might be described as one of the first games with real educational purpose. It was used 200BC for military strategy. Another board games worth mentioning are Mansion of Happiness with aim to teach social principles and morals, Monopoly, Scrabble, or others. 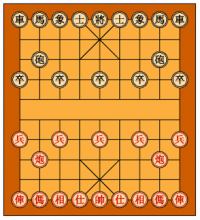 As a first military game can be considered Koenigspiel created by Christopher Weikhman in 1664. By playing this game Prussian army officers were taught battlefield tactics. In upcoming centuries, several new updated variations of Koenigspiel were created. More than century later another German gamewar was invented War Chess. Most of the military games created and played in history were basically board games with war aspect to them but that changed in 1948 when first computer games emerged (e.g., Air Defense Simulation and CARMONETTE). 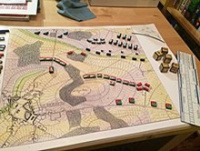 Modern era of serious games can be dated back to the 1960s when video games started to emerge. In addition to the first video games, serious games were created. Their aim was, for example, to simulate defensive tactical strategies in a world other than the real world. [1]

Serious games induce some kind of affective or motor learning (understood in very broad sense) at any level. Put more simply: serious games are used for more than entertainment. [2]

According to the Summit of Educational Games for the game to be marked as serious games it has to:

From historical point of view serious games were used primarily in military and for medical purposes as well. But as the time goes private sector and other users are trying to implement serious games into their educational process. Main reason for this growth of interest is the fact that educational games can be used in almost every area.

Military games or war games are one of the oldest segments created. They are primarily used for training and simulation of possible situations on the battlefield. War games have evolved from simple games with simple rules into the complex simulators with various military weapons or equipment. According to Michael and Chen the trend of military games is shifting from basic CD-ROMS distributed games into the component-based market meaning that each army will be able to construct their own simulation using different pieces of hardware and software. Main user of military games is obviously military sector of various countries, but private sector and individuals are also a considerable part of customer group. Examples of modern era military games are: Army Battlezone, TacOps, Brigade Combat Team, Harpoon 3, Doom, Warcraft, Operation Flashpoint and others.

Government games form a specific segment of serious games in which players aim to solve tasks and scenarios such as terrorist attacks, floods, crisis, disease outbreaks, ethics training, budget balancing, firefighting and other situations involving solving a crisis. Government games are helpful when user tries to learn how to act in crisis situations. This situation can be simulated on different level of governance. Environment and elements of simulation in government games is often changed in order to create a completely new conditions for user to deal with. There are few advantages that this segment of serious games offers but the ability to rerun the simulation and ability to simulate scenarios that would not be possible to simulate in real life are the most important ones.

Serious games found their applications even in large corporations and are being widely used to this day. From the historical point of view serious games were implemented in corporations in 1990s through CD-ROMS and later via Internet. For companies implementing trainings through corporate games means cutting the costs for various items such as training staff, special equipment, offices and others. Corporate games are especially useful in situations in which: the learning material is too complex or boring for being conventionally trained, when trained audience is challenging to reach, when sophisticated consequence analysis is required, and when communicating or developing corporate strategies. Applying serious games in aforementioned situations might improve people skills, job-specific skills, organizational skills, communication skills and strategy skills.

The term healthcare games is mostly perceived as a tool for teaching medical students or medical workers something new from their field. But there is a number of healthcare games used for patients for a variety of reasons. When discussing or thinking about implementing serious games in healthcare field there is a number of advantages that support this decision. Achieving behavioral change is one of them and it means that patients suffering from chronic pain can learn how to ease their own pain just by playing healthcare games and in addition they can have fun while playing these games. Another benefit is reducing the workload of medical workers. Patients are able to independently exercise without the assistance of medical staff and therefore can save their time. Last but not least benefit is associated with VR technology when treating patients. By using VR technology and special healthcare games patients can experience more immersive way of treatment. Aforementioned benefits are primarily used for patients but as mentioned above medical students can also benefit from healthcare games. Ideal example is a game in which students use VR technology to travel through human body. [2] [5]

Advantages and disadvantages of serious games

Up to this day it is difficult to specify and name consequences that serious game have on human body and cognitive skills. One of the most significant advantage associated with serious games is that some situations that cannot be taught in real life can be simulated in these games. Playing educational games might support students in their field and help them expand their knowledge through various simulations. Among other benefits of games analytical and spatial skills, strategic skills and insight, learning and recollection capabilities, psychomotor skills and visual selective attention can be found. An interesting fact is that playing violent games can help with frustration alleviation.

However, there is a dark side when playing games or serious games for longer time period. Some studies have concluded that games, especially video games, might have various negative impacts such as health issues, psycho-social issues and the effects of violence resulting from video games. [2]

Considered to a grandfather of serious games and one of the most significant representatives in the field. Microsoft Flight Simulator a comprehensive flight simulator used for civil non-fight aviation. First version of MSFS was created back in 1982 and interestingly it is the longest-running software product line for Microsoft. This serious game has been developing since 1982 until now and the latest version comes from 2020.

Tiltfactor laboratory is more like the research and development center than the serious game itself. Created in 2003 Tiltfactor Laboratory offers a number of educative games with goal to make social change among people. 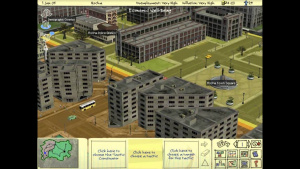 This serios game can be classified as newspaper serious games aimed to attract attention of people especially of students and reporters. The main topic is war in Sudan and tries to outline the experience of 2.5 million refugees escaping the area of war conflict. [Website www.growthengineering.co.uk] states that Darfur is dying attracted nearly million gamers. [7] 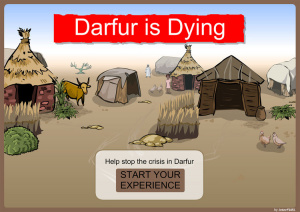 Similarly, to Darfus is dying Peacemaker is another serios gaming aiming to spread awareness of Israeli-Palestine conflict and tries to promote peace among people. This game is based on making social, political and military decisions for the government. Each decision has an impact which is presented to explain the bigger picture of the conflict. 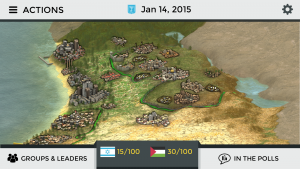 María López Hernández in her thesis is describing wheter serious games might be suitable tools for teaching young adults about prevention measures that could mitigate the spread of COVID-19.

Interesting TED talk video from Andre Thomas on Effective use of game-based learning in education.