Simulation should answer the question how many female dogs is optimal to keep for:
1. making sure that all dogs get their owner
2. satisfying the demand for golden retriever puppies
in that order.

he goal of the simulation is to simulate the whole simplified process to find the optimal amount of female golden retriever dogs owned and/or kept regarding all given variables and facts. Goal is to only have the ideal number of breeding dogs capable to fulfill the given birth giving plan, attempt to sell as many born puppies as possible and at the same time indirectly let the owner of a kennel satisfy the demand for puppies originating from the kennel. All puppies born in a kennel are pedigreed and their genealogical tree is thoroughly recorded. The kennel contains 5 breeding female dogs at current state.

When first seeing the SIMPROCESS possibilities and observing the way to show the simulation running, an idea of pet breeding simulation almost immediately came to mind. Such a simulation compound of the generating (literally generating in this case) an entity - puppy delivery, delay - puppy growth and then disposing the entity - either finding a match with a corresponding demand (a waiting customer), offering and older puppy for lower price, or just keeping the particular one in a kennel - is exactly the discrete-event type of simulation that could be shown quite transparently, comprehensible yet clearly enough using this simulation tool.

While the simulation has been conducted, no significant restrictions were found using just a trial version of the program. Few not that necessary activities had to be cut and the rest of the simulation optimized to make sure that the limit for a number of activities is not depriving the simulation of possibly interesting results. Model has been adapted for currency of american dollar (exchange rate set to 25 CZK / USD).

The simulation consists of 4 processes:

Just one of the processes - the "Leaving" process - contains most of the activities used starting from the probability based division of puppy gender, customer decision making situation and handling an occasional exception - the case when there is no demand for a particular puppy and not even the kennel owner desires to keep it.

The simulation is set to be run in numerous iterations (replications). The more breeding female dogs the kennel owns, the more birth giving occasions there are. For the purposes of this simulation there is no need to simulate breeding dogs in any way, the only thing that is important is the recurrences of such events such is birth givings. It has been decided that each replication will simulate just a one litter had by one female breeding dog. In average, female golden retriever female is capable to give birth once a year and a half when the dog's health and well being is considered a number one priority. Simulation is set to show just a one such cycle. The lasting of a whole simulation including several replications is set to be an exact year and a half. That means that the number of replications equals to number of female breeding dogs within 18 months and actual breeding dogs as en entity or a resource may now be omitted in the simulation.

The probability distribution for the demand is set to be invariable in a several runs of a simulation set period of time for a slight simplification. From a personal experience, demand for pedigreed puppies from a particular kennel changes quite a lot, yet the average remains at a very similar level, no matter how many puppies were sold in the past. It is possible and recommendable to adjust the value higher (lower) in a consequent time period - when the time simulated in a simulation passes - when the average demand grows (decreases) based on the actual demand counts have been observed and noted. The actual values are dependent on set number of replication. Normal distribution was chosen to be calculated with.

The model is based on real data gathered from personal experiences, partly provided by a real kennel owner.

Demand has been implemented as a resource being used within the visitations activity. Normal distribution was used.

Golden retrievers give birth to approximately 8-12 puppies per litter, but extremes may might occur as well. Probability distribution used is normal distribution (Nor(10,2)). When puppy is born, it can die in approximately 8% of cases. The rest of surviving puppies carry on to the upcoming process, which is growing up.

Variable expenses necessary per puppy are in average 220 USD (diet: special nourishment for puppies, vet care: vaccines, preventing of possible worm infestation). Expenses are used in this phase, because they do not vary significantly in the whole process of growth. Every puppy that makes into this process has to be taken care of and fed, taken care of and kept in a safe environment with its mother at least for two months since birth. Therefore a delay activity has been implemented with a fixed time span of two months.

When a kennel owner decides to keep the puppy because of its exceptional characteristics, it is pre-selected and marked as a not for sale puppy - simulation has different development process. The puppy can be kept for breeding or dog show purposes. Such an exception can rarely take place, yet there is a possibility of it happening. The possibility is set to be 0,045%.

First thing that has to happen is a gender differentiation. The ratio is pretty even, there is on average slightly more female dogs then male dogs. The probability has been set to 0,47% for males and the rest for females.

After the gender recognition, puppies are let to be visited by costumers - already gender defined. Visitation time last about one month (exponential distribution Exp(30) in days) and can last up to 2 months. In these visitation activities the demand resource takes place. In simulation the demand is understood as the final number of customers decided and willing to buy a puppy of some particular gender. Hesitations and mind changing aspect were not taken into consideration, because customers are not handled as an entity and most importantly their mind is already set.

When the resources are consumed (there is no more customers to pick up a puppy) and approximately a month passes, puppies are not bought (disposed of the desired way) and they get older. Three months age in a puppy is an age than the majority of customers with a demand for a pedigreed puppy do not find optimal any more. Grown puppies stay in the kennel and are taken care of even further with an additional expenses (85 USD). Expenses at this point consist of a nourishment mostly, therefore it is lower than the initial cost.

The puppy is then advertised individually and given to a customer that does not mind the slightly older age of a puppy and still desires a pedigreed puppy. Pricing at this point is set to zero, because the price drops very quickly with age and the expenses start to exceed the possible gain, so these left-over puppies are might be eventually making a loss. Nevertheless, the most important goal is to find them a new home and increase their chances to have a fully-fledged lifetime. 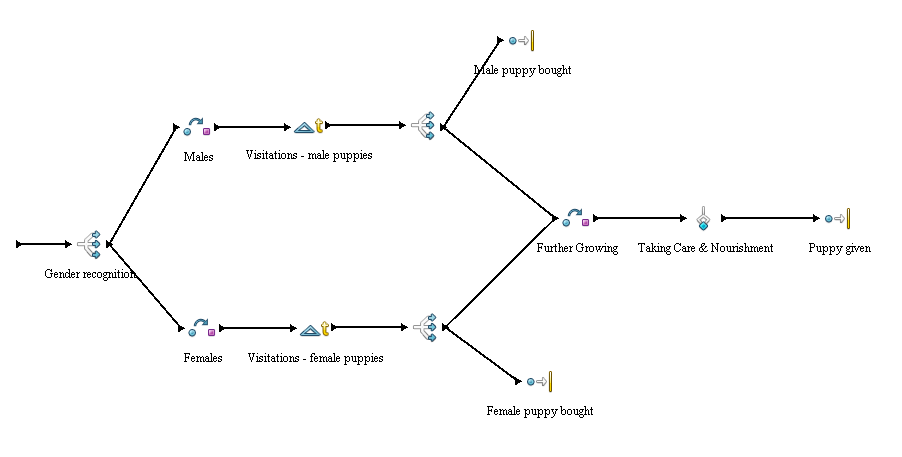 
- Lower earnings were achieved and more puppies have been left to grow up to the stage that demand for them dropped drastically.
- Their well being is not guaranteed and a lot of additional effort would have to be given to find a new owners.
- In this case none of desired benefits would be obtained.


- Even though earnings are lower, all puppies were passed off and no potential was wasted.
- This option fits the requirements if the priority of the kennel owner is to take care of new born puppies with the inevitable risk that demand may be left unsatisfied and a lot of costumers may be lost in the process.

As expected the proportion between earnings and puppy well-being at the end seems to be functioning almost every time in opposition,

but in one case conducted simulation has showed that both aspects can get worse at the same time.

Changes made in the second simulation (increasing the amount of dogs by one) have not shown to be improving neither of desired benefits. The idea of having more breeding female dogs in order to either make earn more or has proven to be not working as expected - too many puppies did not get sold and less money was earned.

The third simulation turned out to be very merciful to all puppies leaving none with no arranged customer, yet the earning were the lowest of all cases. It seems that the current female breeding dogs amount is sufficient to have the highest possible profit when considering all dogs covered in the breeding process.

In case that the dog owner finds it really problematic to find home for too grown puppies, one if his breeding dogs should retire.

Given the ordered goals in Problem definition section, optimal number of breeding dog is one less than the number that is allocated in the current state, which means only 4 active breeding female dogs.