The inheritance of blue eyes

In my simulation I would like to simulate the genetical inheritance of the genes responsible for blue eyes.

I will focus on the distribution of the people with the apparent traits of blue eyes considering the inheritance of the respective genes responsible for eye color and considering the migration rate in to the country. Every year a definitive number of immigrants will come to the country. The genetical traits of the immigrants and the habitants of the country will be different, and due to the genes responsible for the blue eye genetical trait being a recessive gene I would like to research if even a small number of immigrants with the dominant brown genes are enough to dilute the genetic stock of the country which will lead to the extinction of the natural blue eye color.

Our DNA is responsible for many of our characteristics. Our genes are made up of two alleles which consist are genetical information. We receive one allele from each of our parents and these two alleles combined determine our genetical traits.

In certain circumstances one allele is dominating the other allele; in these cases the first allele is called dominant while the second one is called recessive.

The genes defining the eye color of a person in the model used for my simulation can be divided into two locust (genes): at one locust there is a segregation between two alleles the B allele which is responsible for the brown eye color, while the other b allele is responsible for the blue eye color (OCA2 gene). (1) The other locust has the following allele pair: G for green eyes and g for light colored eyes (gey gene). The capital letters are used because they are dominant genes: if different alleles can be found for the same locust in the parents the end result is always the dominant color. Another important fact about the locust is that if B allele is present it does not matter what is present at the other locust (G or g) the B allele dominates the other locust which results in brown eyes. With the above mentioned we can consider 16 results as it is illustrated in the following picture: 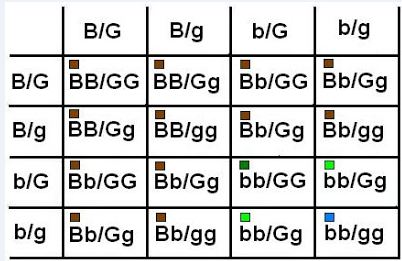 During the inheritance of the genes the children will receive one gene pair from their mother and on gene pair from their father. The received allele is random from each gene (one allele from the OCA2 gene and allele from the gey gene from one parent) with a 50% probability. This is explains the possibility of brown eyed parents having blue eyed children (eg both parents having Bb/Gg genes and both passing on b/g genes). (3)

I would like to emphasize the fact that my simulation will use this simplified inheritance model which does not explain other natural occurrences like blue eyed parents having brown eyed children, which can sometimes happen in special cases. It should be also noted that eye color is also effected by other factors and it is possible that eye color changes over our lifetime. (2)

During my simulation I have used Netlogo 5.0.4 version.

The model contains a starting position where we can manually adjust the chances of the agents spawning with the mentioned genes (for the first locust B or b and for the second locust G or g, and considering that every human have these genes twice). The possible combinations are consistent with the 4X4 Punnet square matrix and using the standard 50% percent chance for the two choices we get a close result for the matrix’s color distribution. We can also manually adjust how many women and men do we want to spawn and the age of the created agents is randomly distributed between one and fifty.

During the simulation every agent will age and die reaching a settable average life expectancy. Every agent is capable of reproducing when reaching the age of 16 and for women they cease to reproduce when reaching the age of 40 and for men the age of 50. There is a simplification in the model where it is set as a parameter that a woman can only bear two children. The agents are randomly walking around and the men (just like in reality) try to reproduce with the nearest appropriate female (every female who can bear children with a 75% probability is considered appropriate). During the inheritance process the child (who can be either male of female with the same percentage) will inherit randomly (50% odds) 2 genes (one for the first loci and one for the second) from the father and 2 genes from the mother. There is also immigration into the country: set number of immigrants will come to the country each year; they have separate genetical composition compared to the habitants of the country. The genetical composition of the population is adjustable on two slides: one slide can adjust the distribution of the first locust (between the B and b allele) and the second locust (between the G and g allele).

Detailed description of the simulation 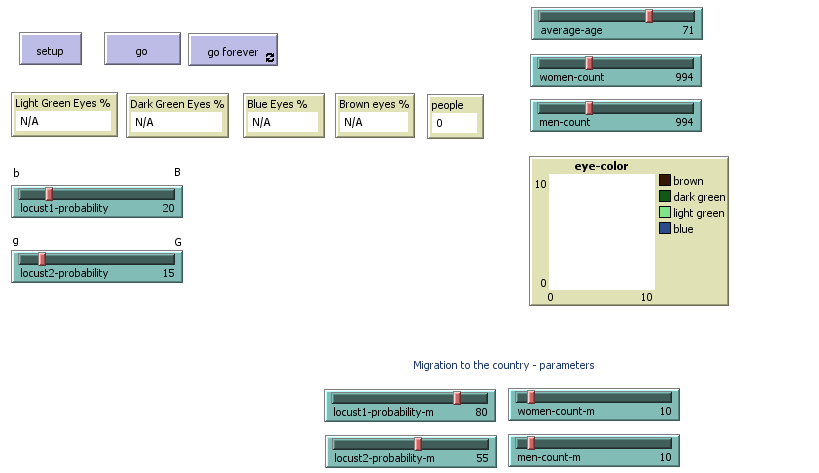 Setup: Setup the model, create the habitants of the country (agents)

Go: Advance the model by one tick

Locust2-probability: The probability of the habitants of the country containing the G allele in the second locust

Women-count: the number of female agents spawned when setting up the model

Men-count: the number of male agents spawned when setting up the model

Locust1-probability-m: The probability of the immigrants containing the B allele in the first locust

Locust2-probability-m: The probability of the immigrants containing the G allele in the second locust

Women-count-m: the number of female agents migrating every year in to the country

Men-count-m: the number of male agents migrating every year in to the country

People: number of people (agents) in the simulation (country)

Each eye color is monitored by percentage of the population

Eye-color: Graphical representation of the number of the different eye colored agents

Results of the simulation

I have run the model in 3 different scenarios where around 45% of the population had blue eyes and 35% brown eyes with the setting locust1-probability: 20 and locust2-probability: 15. Starting population: 994 male and 994 female with an average life expectancy of 71 years.

The 3 different scenarios were the following: each year twenty immigrant (10 male/ 10 female) comes to the country with the setting locust1-probability: 80 and locust2-probability: 55 (around 95% with brown eyes). Then the same settings with only 5 male/ 5 female immigrants and then with no immigrants. I have even let the 10/10 model run for a while and even at 200 clicks the blue population was around 11%.

The results can be found in the attached excel file.

Based on my simulation it is possible in the no immigration scenario that the percentage of the blue eyed agents will rise over time while the number of brown agents may decline (even though they carry the dominant B genes). This of course not true in all cases (eg. Run 1). Due to the gene characteristics of the immigrants in my scenarios the percentages of the inhabitants with blue eyes fall fast, but in 100 ticks even in the 10/10 scenario they were around 20% of the population. And to the question that will the natural blue eyes go extinct in the near future: probably not but we still cannot give a definitive answer due to the limitations of our model: reality is different from the model we used and also many outside factors can effect our eye color (eg. Age).