We will represent a classic recruitment process in a SME and aim at providing some insights about how many recruiters should be hired by our test company in order to achieve maximum efficiency in the process itself and minimum cost for the company over a certain period of time. Our data will be sourced from a real French IT company the author previously worked in.

We opted for SimProcess modelling due to the readability it offers, both in the model and in the results, when running a discrete-event simulation such as ours.

Our model will consist in multiple interconnected stages, called ‘process’ in our software, through which candidates will travel, potentially from the first (‘screening’) to the last (‘hiring’). At each step, a candidate, considered an ‘entity’ in SimProcess, can be either directed to the next step or rejected, which means it gets out of the recruitment process. The majority of our processes requires the dedication of one recruiter’s work for a given amount of time: therefore recruiters are defined as ‘resource’ in our SimProcess model.

There are three ways to introduce a candidate in the process, that is to ‘generate’ a new candidate: unsolicited application (1), application for a job offer (2) and hunting (3). (1) refers to job seekers asking for an opportunity to work for the company we study, without guarantee that there actually is any available position suiting their professional skills ; (2) refers to job seekers directly applying for a specific and specified job offer, whether through a job board (LinkedIn, Monster, JobTeaser) or by email ; (3) refers to candidates directly selected by the company’s recruiters, based on information that is most of the time found online, but not only: CVs on internal and external CV databases, networking at job fairs, etc. Our model considers a company offering five different jobs per month on average.

Each of these three ‘entry points’ is directly followed by the first job of our process, which is ‘screening’: it happens either right after application from the candidate (in (1) and (2)), or simultaneously in (3), but we represented it as a consecutive step for simplicity, and since it can be modelled the same way in SimProcess while remaining realistic. Indeed, screening the CV of an applicant or the one of a potential candidate (in case of hunting) takes a recruiter about the same amount of time. Screening has two possible outcomes: moving forward to the ‘preliminary phone call’, or rejection. This double path is modelled thanks to a ‘branch’ activity, which contains the probabilities of being accepted to the next step or rejected. The ‘rejected’ option consists in a ‘dispose’ activity that removes the candidate from the simulation.

The following steps work similarly: after ‘screening’ comes a ‘preliminary phone call’, followed by the ‘first face-to-face interview’, then the ‘second face-to-face interview’ and the ‘employment offer’, which if accepted ends up with ‘hiring’ of the candidate. ‘Preliminary phone call’, ‘first interview’ and ‘employment offer’ follow the same template as ‘screening’: a ‘delay’ activity giving the average amount of time needed to complete the task, a requirement for one recruiter to perform it, and a ‘branch’ leading either to the next step or to ‘rejected’. There is one slight difference in the ‘second interview’ process: it does not require a recruiter to be performed. Indeed, in the recruitment process we study, the first interview is an HR-oriented interview, to assess the ability of the candidate to integrate himself in the company in a near future; however, the second interview is an operations-oriented interview, to assess the skills of the candidate in the job he is applying for. This second interview is not led by a recruiter, but by the potentially future manager of the candidate, that is a CFO, CMO, CIO, etc. They are represented by a distinct resource in our model, ‘manager’, which will be of a fixed amount of six, which is the total number of managers of the company inclined to participate in such interviews.

Each so-called ‘conversion rate’, that is the average proportion of candidates who go from one step to the next one, is presented in the table below:

Furthermore, our data contains an estimation of the average amount of candidates generated by each ‘method’:

Finally, we include the average maximum amount of time a candidate waits for the recruiter to make him carry on to the next step (candidates who are forced to wait for too long will tend to favour other recruitment processes they may have in parallel):

The simulation will be processed for a one-month period.

We ran several simulations with different numbers of recruiters, and got the following results: 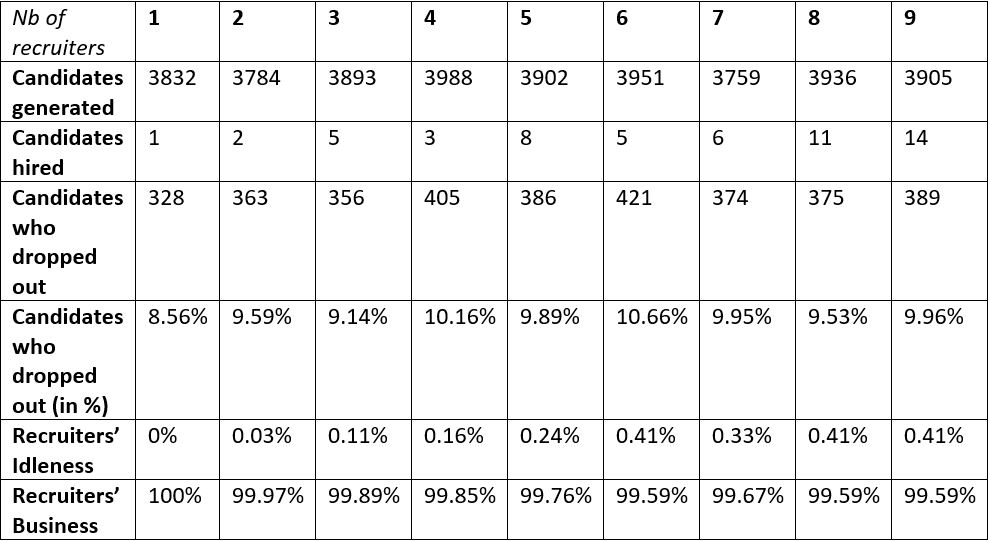 We do not study managers’ idleness or business, since recruiting is not their main task, which means our figures would not be significant compared to their whole workload. 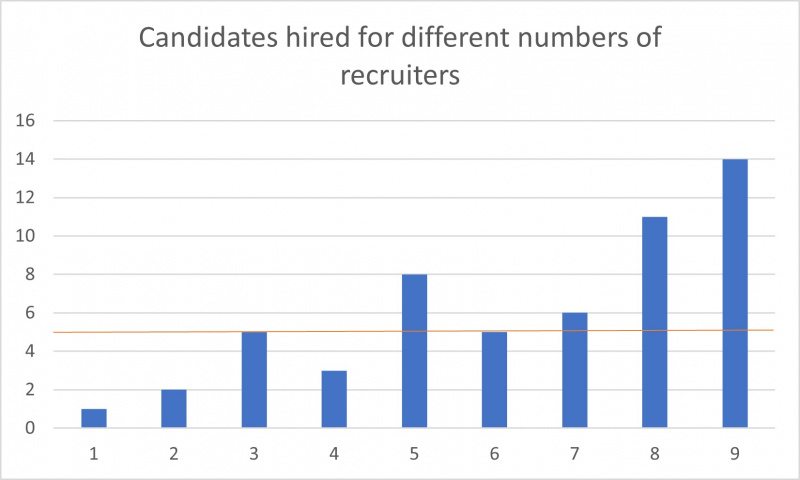 The orange line represents the threshold of five hires, which can be considered as the target result for the company with its five job positions open per month. 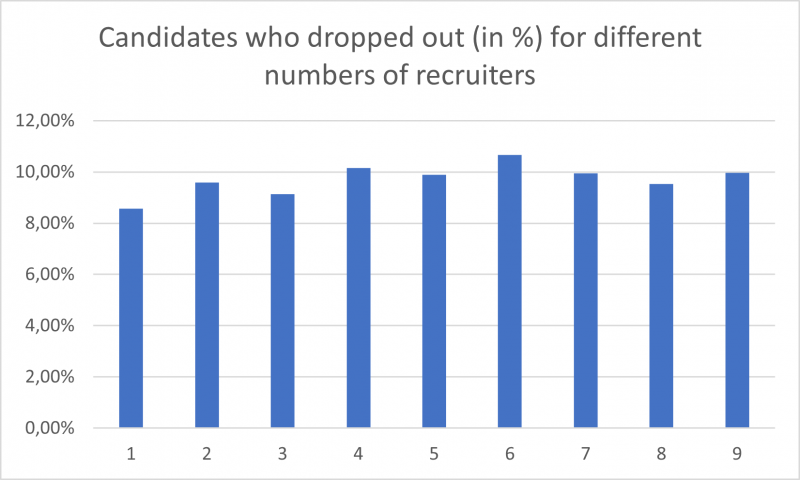 Our results clearly show us that more recruiters does not necessarily mean more hires for the company. As a matter of fact, we can only observe a steady trend from the sixth recruiter, when each additional recruiter means at least one additional hire. Teams of eight or nine recruiters could potentially hire double the objective of five, while still being busy almost all their working time. However, in our case, hiring that many recruiters would certainly be a waste of money from the company’s board, whose members can reach their target with fewer dedicated employees. Of course, we consider each of our recruiters to represent similar payroll charges for the company, which may be a simplistic assumption.

Indeed, it appears that a team of three recruiters can achieve this five hires goal, while being almost ‘perfectly’ busy and scoring the second smallest candidate drop-out rate of all those we computed, at 9.14%. Therefore, this option really stands out as the most viable from the board’s point of view, achieving minimum costs and staffing all the open positions, while losing as few candidates as possible along the way.