The concept of a mixed-strategy was introduced by John von Neumann and Oskar Morgenstern in their 1944 book The Theory of Games and Economic Behavior[1], but their analysis was restricted to the zero-sum games. They showed that a mixed-strategy Nash equilibrium will always exist for any zero-sum game with a finite set of actions.

In his famous paper in 1950, John Forbes Nash go further and proved that there is an equilibrium for every finite game and not only the zero-sum game. Now we can divide Nash equilibria into two types.

Mixed strategy: if the player

available, a mixed strategy is a distribution of probabilities

is the probability for

to choose the strategy

. Also because the mixed strategy is a distribution of probability there is:

Matching pennies is the name for a simple game used in game theory. It is played between two players. Each player has a penny and must secretly turn the penny to heads or tails. The players then reveal their choices simultaneously. If the pennies match (both heads or both tails), then Row keeps both pennies, so wins one from Column (+1 for Row, −1 for Column). If the pennies do not match (one heads and one tails) Column keeps both pennies, so receives one from Row. The following table display the game. 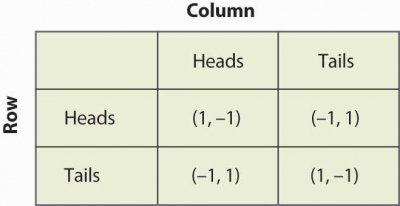 . If Row plays Heads, he gets 1 with probability

. His expected profit will be

. This is summarized in Figure below "Mixed strategy in matching pennies".

, then Row is better off, on average, playing Heads than Tails. Similarly. If, on the other hand,

. Then Row gets the same payoff no matter what Row does. In this case, Row could play Heads, could play Tails, or could flip a coin and randomize Row’s play.

Note that randomization requires equality of expected payoffs. If a player is supposed to randomize over strategy A or strategy B, then both of these strategies must produce the same expected payoff. Otherwise, the player would prefer one of them and wouldn’t play the other.

Battle of the sexes game

The battle of sexes is a two-players coordination game in the Game theory. In this game there is one man and one woman, the woman prefers going to a ballet and the man prefers going to a baseball game. The nuance here is that they both prefers to go together rather than going alone to his/her prefered activity. The game is described in the table below. 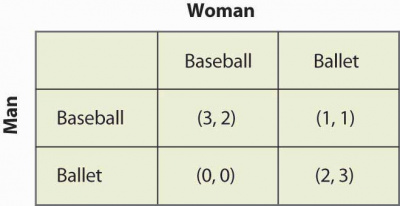 Mixed strategy in battle of the sexes

To find the mixed strategy we need to assign some probabilities to each situation. Let

the probability for the men to go to the baseball game. The computations with the expected payoffs for each situation is display below.

The payoff calculations are the same as for the Matching pennies. For example, if the man goes to the baseball game:

. Then if the Woman is going to the Baseball game 1/4 of the time, the Man will be willing to randomize which event he attends. Similar calculation are done for all possibilities and we multiply the probabilities:

We obtain the following table: 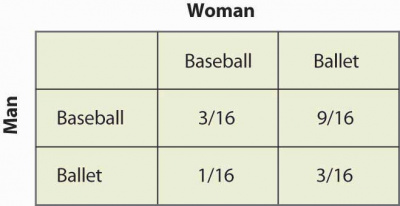 The chicken game is a game in which two players drive two very fast cars towards each other from opposite ends of a long straight road. If one of them swerves before the other, he is called a chicken and will have a payoff of -1. Of course, if neither swerves, they will crash and will get both -4. This is the worst possible payoff. The best payoff is to have your opponent be the chicken, so we assign this a value 1. The last possibility is that both drivers swerve. Then, neither has less honor than the other, so this is a better option than being the chicken. We could assign a payoff matrix to this: 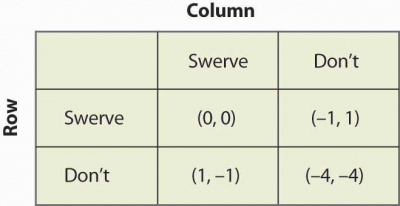 To find the mixed strategy equilibrium we need to assign the same probabilities as for the Battle of the sexes. We can find the table of calculation below.

are required to have randomized choices. The same logic as for the Battle of the sexes is applied, we calculate:

and get the optimal probabilities:

. We just have to multiply these probabilities to obtain the table below. 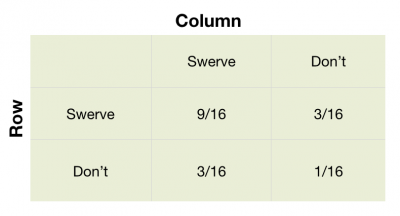 “Rock, paper, scissors” is a child’s game in which two children use their hands to simultaneously choose paper, scissors, or rock. The nature of the payoffs is that paper beats rock, rock beats scissors, and scissors beats paper. This game has the structure that is illustrated below. 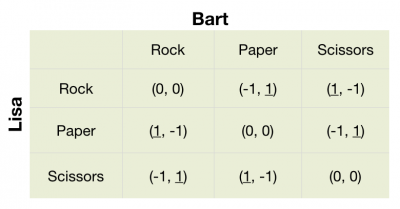 We can note that in the game between Bart and Lisa there is no pure Nash equilibrium, because the gains are directly opposed. if Bart received a big utility, Lisa received a small one. If one player knows what will do his opponent, he will directly win. That is why the game has no Nash equilibrium in pure strategy.

The mixed strategy in this game give you the opportunity to protect yourself against the other.

By choosing a mixed strategy for which Lisa is indifferent between choosing Rock, Paper or Scissors, Bart can increase his utility.