PPC systems and Ad Rank are closely connected topics because they have been created within the same time, share most of principles and serve to one common purpose – to attempt to bring more potential customers to a particular most usually commercially oriented website through paid advertising on other websites that are just being visited by targeted users. Thanks to a good Ad Rank, sponsored links are shown to users when it is calculated as relevant to be shown. In case of being clicked on, Pay-per-click system techniques come to play.

Pay-per-click systems are marketing tools used exclusively for internet advertisement and stand for the idea of advertisers paying every time a user is attracted enough to click on the advertisement link that can be placed on dedicated sections of search engine result page after user input in a form of specific word or word combination or on any found as appropriate website that shows advertisements of other websites in order to create income for their owner.

Websites showing advertisement content have to be in a partnership with a provider of such services – particular sections of the websites are intentionally created and left blank for filling up with advertisement that the provider decides to place there. Suggestions of suitable advertisement are based on algorithms that are supposed to match certain advertisement with a certain web content so that a logical link between them is created. In other words, only in some way corresponding websites are paired to arrange as good click though rate for the advertiser as possible as well as highest possible earnings for the partnered website that provides an advertisement space.

The difference is that advertisements shown on a search engine result page are or should be customized for the query of a user and anticipate him to be more likely attracted as that link might be just the thing that they were looking for, whereas sponsored links on a website are not changed specifically for any of the website visitors and the likelihood of them clicking on such link is not that high - they may not be interested at all.

This form of marketing can be called rather passive, because when the advertisements are well done – highly optimized with thought-through marketing strategy, using relevant only AdWords, made coherently and logically in general - not aggressively or targeting wrong user groups with too generic words – it is possible to then let the users make their decision whether to get interested or not and attract much more visitors to a website with no extra necessity to try to lure each one of them in a personalized matter. Unfortunately for advertisers, rules for making the optimal advertisement with a high enough chance to work on a search engines are changing quite frequently and it is not easy to keep up with all those updates, slight changes and ferocious competitors trying to make most of it.

Google AdWords is the single most popular PPC advertising system in the world. The AdWords platform enables businesses to create ads that appear on Google’s search engine and other Google properties. AdWords operates on a pay-per-click model, in which users bid on keywords and pay for each click on their advertisements. Every time a search is initiated, Google digs into the pool of AdWords advertisers and chooses a set of winners to appear in the valuable ad space on its search results page. The “winners” are chosen based on a combination of factors, including the quality and relevance of their keywords and ad campaigns, as well as the size of their keyword bids. 4

This term in general is used for the evaluation each advertisement suggestion gets based on selected features of the advertisement itself, advertiser and success of their campaigns in the past and, of course, the amount that the advertiser is willing to pay in order to get his advertisement reach users. The formula behind the final Ad rank consists of two elements

There are a number of factors that determine the Quality Score of a given ad. While each search engine has released directional information on the factors most important to them, presumably in an effort to guide their advertisers towards making better ads, none has revealed their formulas in detail. Below is a summary of what has been released. - Click-through rate - Ad copy relevance - Landing page quality - Landing page load time - Geographical considerations - Other factors 4

Ad position is the order in which your ad shows up on a page. For example, an ad position of "1" means that your ad is the first ad on a page. In general, it's good to have your ad appear higher on a page because it's likely that more customers will see your ad. Ads can appear on the top of a search results page, on the side of the page, or on the bottom of the page.3

Ad position is determined by your Ad Rank in the auction. Your Ad Rank is a score that's based on your bid, the components of Quality Score (expected clickthrough rate, ad relevance, and landing page experience), and the expected impact of extensions and other ad formats. If you're using the cost-per-click bidding option, your bid is how much you're willing to pay for a single click on your ad. The quality components of Ad Rank are a measurement of the quality of your ad text and landing page in the context of what a user is searching for.2

Google AdWords slightly modifies the factors that are being considered when the quality score is being determined.

How the components of Quality Score affect Ad Rank

Every time someone does a search that triggers an ad that competes in an auction, we calculate an Ad Rank. This calculation incorporates your bid, auction-time measurements of expected CTR, ad relevance, landing page experience, and other factors. To determine the auction-time quality components, we look at a number of different factors. By improving the following factors you can help improve the quality components of your Ad Rank:

- Your ad's expected CTR: This is based in part on your ad's historical clicks and impressions (excluding factors such as ad position, extensions, and other formats that may have affected the visibility of an ad that someone previously clicked)

- The quality of your landing page: How relevant, transparent, and easy-to-navigate your page is

- Your ad/search relevance: How relevant your ad text is to what a person searches for

- Geographic performance: How successful your account has been in the regions you're targeting

- Your targeted devices: How well your ads have been performing on different types of devices, like desktops/laptops, mobile devices, and tablets 6

Specific kind auction system is being applied when bidding on specific keywords and establishing the final price that advertisers are going to pay for displaying their advertisement. As being said reviously advertisers offer not the final amount, but maximal amount they would be willing to pay. In most cases such amount is not reached, because

Although the provider earns less per click from the advertiser thanks to the lower pricing, there is then a higher potential of significantly increased number of users clicking the link. Implementing such strategy makes a lot more sense and theoretically does not cause any harm, on the contrary it is expected to raise the level of satisfaction of everyone including the user.

The advertiser pays as much as the amount that the advertiser that is placed right below him offered initially. Such amount is divided by the advertiser’s quality score (the higher, the lower resulting price) and 0.01 $ is added at the end to make sure that no advertisement is marketed for free. 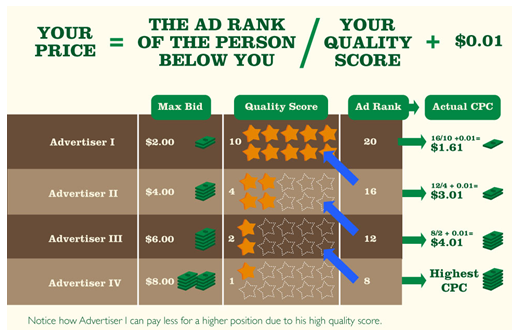 Facebook ranks advertisements using Relevance Scores referring to the general Quality Score. Facebook really tries to prevent such situation that its users become too aware of an advertisement shown specifically for them. It can be caused by either

- because there has been too much advertisement shown at one point, exceeding the amount of not commercial content

Users can – to a certain extent – hide advertisement of a same brand when their patience limit is being reached by the unwanted content that is being shown on their Facebook wall.

It can lower the cost of reaching people. Put simply, the higher an ad’s relevance score is, the less it will cost to be delivered. This is because our ad delivery system is designed to show the right content to the right people, and a high relevance score is seen by the system as a positive signal.

It can help optimize campaigns already in progress. While ad campaigns are running, advertisers can monitor their relevance scores. If a score begins to dip, it may be an indicator that the ad’s creative or audience needs to be refreshed. 1

If the advertiser insists on getting the best quality score possibly, the server wordstream is providing several tips hot to achieve it:

- Keyword Research – Discover new, highly relevant keywords to add to your campaigns, including long-tail opportunities that can contribute to the bulk of your overall traffic. - Keyword Organization – Split your keywords into tight, organized groups that can be more effectively tied to individual ad campaigns. - Refining Ad Text – Test out PPC ad copy that is more targeted to your individual ad groups. More effective ads get higher CTR, one of the best ways to improve Quality Score. - Optimizing Landing Pages – Follow landing page best practices to create pages that connect directly with your ad groups and provide a cohesive experience for visitors, from keyword to conversion. - Adding Negative Keywords – Continuously research, identify, and exclude irrelevant search terms that are wasting your budget.7

Advertising campaigns can be incredibly powerful when using all the possibilities that are available for internet marketers. The dream of such advertisement is to target only customers that are very likely to react to such advertisement, bringing them what they desire or need without them even knowing about it. General theory behind such direct targeting should be highly beneficial for customers and highly profitable for advertising companies.

As the algorithms change in very short iterations to get even more effective more quickly than ever before, responding changes in economic systems should start becoming more and more visible – economic indicators of customer utility should increase slowly as well as financial turnovers on the market of e-commerce.

It is very important to set the whole system right and justly, so that everything works transparently to everyone’s satisfaction and it all depends on the intentions of the biggest companies on the market that have an enormous impact on the whole internet future development course.