This model simulates the evacuation of an aircraft, which is an important problem in reality. Netlogo was used as the software. A drawing of an aircraft, which is imported into Netlogo, serves as a blueprint. The drawing contains different colours, which are converted from colours to patches in Netlgo. These then determine the outlines etc. of the aircraft.

Different settings can be made: *The number of passengers

The following can be visualised:

The aircraft has 8 different exits. The passengers always try to take the exit that is closest to them. There is also a pilot on board, he tries to leave the plane himself via his own exit as quickly as possible.

In addition, passengers can panic and the probability of panicking can also be adjusted. As soon as they panic, they are coloured red in the visualisation and they do not find the exit immediately.

There is a Setup button to confirm the settings and a Go button to start the simulation. Different sliders can be adjusted to see how it affects the number of escapes. 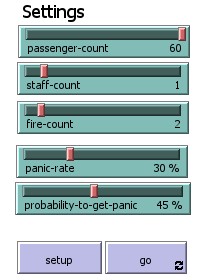 The simulation shows that the more passengers die, the more people there are on board who are panicking. For this reason, it is important to remain calm on board. Of course, the number of fires also plays a big role, as does the number of personnel extinguishing the fire.

The simulation can be downloaded here:

This zip folder contains both the Netlogo simulation and the blueprint that will be imported.