These days most organizations put emphasis on bigger goals. The goals on the one hand should be inspiring and motivating. On the other hand, they suppose to be doable. When the organization is not capable of meeting its goals, they are trying to come up with some solution. Sometimes the reason for not reaching the goal may be more simple than we expect or/and even unexpected. Organizations often have set more than one goal and sometimes one of the goals gets all the attention whereas the other goal remains under the pressure. Organizations react to this by reducing the goal to shorten the gap, but over time they unintentionally drift further from what they are really trying to achieve. The concept which will help us to understand this problem is the "Drifting Goals" archetype.

Drifting goals is a concept that refers to situations where short-term decisions result in a retrogression of long-term goals. It starts with an initial gap between desired performance and the actual performance. If an organization has a gap between a goal and actual results, it will attempt to take some actions to close the gap. There are two main reactions to shorten the gap. One can either increase his efforts (corrective actions) or reduce his goal. [2]

It may take some time for corrective actions to take effect. If the gap continually increases or persists due to the delay of corrective actions, the pressure to lower the goals will increase. While corrective actions take time to have an effect, the effect of lowering the goal is immediate. Since such a situation is not a one-time occurrence, the organization can continue to slowly reduce the goal over time. The goal reduction will remain unnoticed, as it happens gradually over time and will lead to a general standard decrease. [2]

So, to sum up there are two reactions to the increasing or persisting gap: [3] [1]

Changing the goal is not always wrong. Sometimes it is necessary in cases when the goal turned out to be anyhow inappropriate or the current state requires more flexibility. However, it can lead to a long-term standard decrease, so it is important to distinguish the difference between legitimate adjustment of the goal and the Drifting goal. [3]

The causal loop diagram of the Drifting Goals archetype consists of two balancing loops (see Pic.1). As was stated before, the situation starts when there is a gap between desired performance and actual performance. The goal is being compared to a current state. If the gap persists, corrective actions are taken in order to improve the current state. This forms a basic balancing loop (B1). A delay between corrective action and the actual state represents the fact, that the results may take some time to become evident.

The main difference between the 2 loops is that lowering the goals takes less time to get to a goal, whereas corrective actions usually take time for an organization to get to the goal. 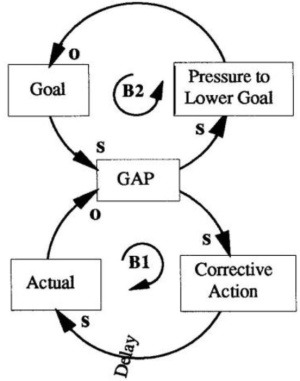 Drifting goals has a long-term effect on goal setting, as every time when an organization cannot meet the goal, it will set the goal lower and lower to ensure they meet the goal. In Picture 2, we can see, that over time the gap is still the same, as the organization is not trying to improve the state and find the problem. But they are just adjusting the goal so it will be closer to an actual state. Meanwhile, the actual state is also decreasing. 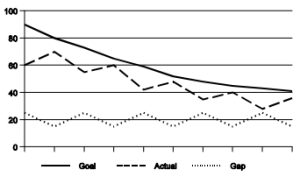 To make it clearer, let's look at the example of the "boiled frog" syndrome. The nature of this syndrome is the following. If you put a frog in a pot of boiling water, it will immediately jump out and escape. But if you put it in a pot of nicely warm water and raise the temperature slowly, the frog will swim and enjoy the lukewarm water. As the temperature rises, it becomes more lethargic until it eventually dies. In this case, the frog became a victim of the drifting goals scenario.

The reason drifting targets are compared to "boiled frogs" is that goals such as the frog's ideal temperature tend to drift slowly and usually go unnoticed. Like a frog that doesn't recognize a gradual rise in temperature, organizations often stay unalarmed about performance degradation if it occurs over a long period of time.

This concept can be used in different aspects of our lives. Let's see more real-life examples.

Imagine there is a gap between the previously acceptable deficit level and the actual (see Pic.4). The gap can be closed in two ways: by reducing government expenses (B3) or by increasing tax revenues (B4). However, the current situation leads to increased spending, and taxation showed mixed results. This situation will result in an even higher deficit. The raising deficit will lead to a more significant gap between the current deficit and the maximum acceptable one. As a result, the gap will create pressure on raising the deficit target and eventually resulting in a higher maximum acceptable deficit (B5).

In this case, B3 and B4 are “corrective actions”, whereas B5 is a “pressure to lower the goal”. 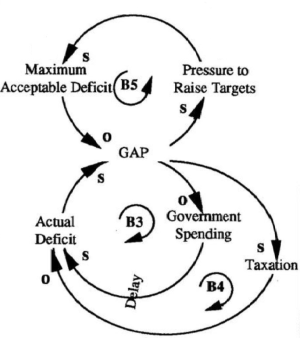 Imagine a company dedicated to producing quality products. However, to improve efficiency, the company is launching a number of cost-cutting initiatives. They increase line speed and change cooking methods.

Over the next five years, sales of the products will begin to decrease. This led managers to believe that there had been a change in consumer eating habits. After another two years, sales continue to decrease. The company decided to make consumer research. The results show that the taste of their products has changed for the worse.

Further analysis showed that the gap between the quality standard and the actual product quality first appeared over 10 years ago. This gap should have been a signal to management that the company's processes, equipment, or ingredients needed attention and possible investment. However, the company was distracted by its cost control campaign and the quality standard was lowered in favor of other changes. As a result, the quality very slowly fell below the level of consumer tolerance.

How to deal with Drifting Goals

So after all the question is how can we react to Drifting Goals? How can we deal with the gap? And how to prevent goals from drifting?

Drifting goals does not always lead to decreasing levels of performance. This concept can be reversed in the case when the company’s goals and standards continually improve. In this case, every time when the company meets its goal, they are increasing the goal even higher. This will start the gap again, which will lead the company to action to bring higher performance.

What to do when there is a gap, should we focus on the gap or focus on setting the goal more achievable? The answer is the gap. It is easy to set a goal, but it is much harder to reach the goal. It is better to learn some lessons by trying to reach the goal than just to adjust it so it will be easier to get to.

How to prevent goals from drifting? [2]

The drifting goals model is a simple model of reality. In real life, there are so many factors, which make it harder to understand what causes the gap. But it can be used to identify potential issues.

After all that has been said we need to remember that:

An example to practice

Try to create a diagram based on the company's change example. You can use the Vensim program.