The beginning of mathematical game theory originated in 1944, when the book called Theory of Games and Economic Behavior [3] by mathematician John von Neumann and economist Oskar Morgenstern was written and published by Princeton University Press. Game theory is the discipline of applied mathematics, that analyzes the spectrum of conflict decision situations that may occur, wherever there is a conflict of interests. Game theory models try to analyze these conflict situations and by building a mathematical model of the conflict and computing are trying to find the best strategies for specific parties of the conflict.[4]

Game theory is a branch of, originally, applied mathematics, used mostly in economics and political science, a little bit in biology, that gives us a mathematical taxonomy of social life and it predicts what people are likely to do and believe others will do in cases where everyone's actions affect everyone else. That's a lot of things: competition, cooperation, bargaining, games like hide-and-seek, and poker.[5]

The basis of most mathematical models of game theory is the assumption of rationality. Every player acts such that he maximizes their profit (their win).

The assumption of rationality (of each player) is the factor which distinguishes the game theory from the theory of decision.

All the games that we are considering in this chapter have certain things in common and these are:

In addition, the following are properties which a game may or may not have:

Game in the normal form is defined by set

are sets of strategies and

are winnings of the player

for individual strategies. The normal form game is usually represented as a matrix.

The game for two players in normal form is shown below:

and the player number 2 chose from strategies

. There is an assumption that this is a zero-sum game, and in this game applies:

and therefore there is need to write only the value of the prize (utility function) for one player.

Note: according to the definition of the state space

Example of the enrolment of the unspecified game: 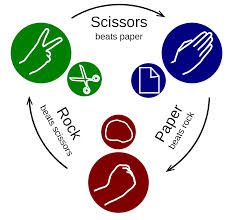 Normal form describes possible strategies and winnings of each player and allows the study of the question of optimal strategies. If there is interested in finding a way appropriate strategies there is need to use enrollment of the games in explicit form. [6]

Extensive or explicit form of the game is used for the formalization of these games, in which plays a role the order of moves. These games are represented as trees. Each node represents the place where one player chooses stroke and each edge corresponds to a possible move.

The notation of the NIM game in explicit form is shown below. In this game of two players at the beginning there are two stacks of two matches. Players are taking turns and they are taken from one of the piles either one or two matches. The player who removes the last match lose the game.

The goal of every rational player is to win the game, other words to maximize their winnings. Consider the only strategy antagonistic games between two players that are written in normal form:

This matrix reflects values of the player number 1 winning. This player chooses between these strategies (rows

The player number 2 progresses analogously. Between its strategies (column j and matrix

) he chooses the strategy t*, for which the maximal value of his loses (in this column) will be the minimal one from all columns.

is called the lower price of the game

is called the upper price of the game

Example with the equilibrium point

For this normal form game, the equilibrium point takes a form

. For the player number 1 is min

and then max min

what corresponds to strategy

. For the player number 2 is max

and then min max

what corresponds to strategy

Definition of the saddle point 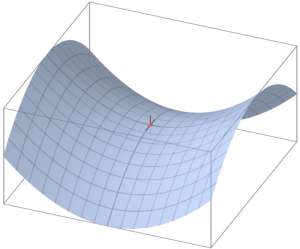 i called saddle point of the matrix and presents the price of the game.

Game theory tries to find the equilibrium point in every game, where players choose strategies. Players choose such strategies, that anyone of them does not have the reason to change its strategy assuming andt that nobody else does change the strategy. If there is a point of equilibrium, optimal strategies of both players are called pure strategy

Sometimes the equilibrium point and then the pure strategy does not exist. In the game shown by the matrix below:

the biggest element is

the smallest element is

And this game does not have the equilibrium point and that is why there are no pure strategies of the players.

Definition of the mixed strategy

Where there is matrix game described of this matrix:

Then there is a game with payroll function:

and it is called mixed extension of the original game. This mixed extension means, that every participating player chooses from his strategies with certain probability. The mixed strategy is written as the vector of the relevant probabilities.

Let's go back to this game:

Mixed strategy of individual players can be found as the extreme of payroll function, that are values p and q for which applies that

will be maximal resp. minimal.

and there are partial derivations:

Definition of the non-antagonistic game

The couple of strategies (s*, t*) is called the equilibrium point, just when:

Example of the Prisoner's dilemma

The best example of the non-antagonistic game is non-cooperative game Prisoner's dilemma. Where two prisoners are accused of the same crime. If both of them confess they are both sentenced to 5 years in prison, because the confession is a mitigating circumstance. If both of them deny the crime, they will be both sentenced of the minor delict to 1 year in prison. If only one of them admits, he will be in the role of chief witness acquitted, but the other accused will be sentenced to 10 years in prison. The relevant notation of this game in normal form is shown below. The number in the matrix indicates the length of the sentence. The main goal of the players is to minimize the value of the length of the sentence, or choose a strategy, for which the maximal amount of punishment (for possible strategies for co-accused) is minimal. Then:

. By looking at the double matrix, we find that the better (in terms of the amount of punishment) would be the strategy

because in this case the amount of the punishment for both prisoners was lower. Hence the name of the game is "dilemma". None of the accused does not know whether his accomplice succumb to temptation confess and go unpunished. [6]

The search for suitable strategy

The following chapters show two ways to search for a suitable strategy for antagonistic games - minimax and alpha-beta pruning. Both strategies are shown in the example of the game written in developed form represented by the tree.

There are also algorithms for searching trees and the main difference between these algorithms and algorithms for finding strategies during games is that there is no control over all transitions between the nodes of the tree because some of the moves do the opponent.

More precisely: if we consider sequential game of two players, then player A decides at nodes that are even-numbered and player B at nodes that are odd. This method of searching when players have no control over all of their moves is called adversarial search.[6] 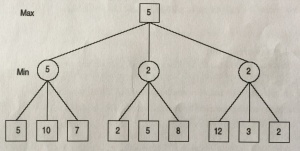 Minimax strategy for decision making under uncertainty has been described above. It is based on the principle that assuming the assumption of rationality of the opponent, we choose such a move to make the best subsequent move of the opponent, from our perspective the least dangerous.

The notation consists of the tree, where to each node is assign a value based on the number of wins (value function

) in the sub tree of the node. Each node of the tree is divided into the MAX level (even nodes) and MIN levels (odd nodes). At every MAX level the first player selects the move, which maximize the value of the specified criterion, and at every MIN level the second player, which minimizes the value of that criteria. The criterion is MINIMAX value:

are all the successors of node

Application of MINIMAX assumes, that the whole tree of solution is known. The example from real life is tic-tac-toe.[6]

is modification of the MINIMAX strategy based on the branches method, which allows cuts not perspective parts of the tree. In the algorithm, there are two new values:

is the biggest known value for the node MAX

is the smallest known value for the node MIN

value and if the MINMAX