Class: 4IT496 – Simulation of Systems

The Pay Gap, unequal pay between men and women, is one of the taboos nowadays that the European Union wants to tackle. It’s a difficult problem to solve because it is influenced by many other factors as education, part-time working, families, ... I want to try to solve this problem by researching how the different factors are interrelated with each other and what the best solution is. A simulation in Vensim with real numbers will help me with that. For the numbers, I will focus on one country, Belgium, because I found a good source with some good and interesting numbers on this country and it's my home country.

I chose to work with Vensim, because this problem can be seen as a group of interacting and interdependent problems forming a complex whole. The reasons of the pay gap are caused by other factors etc. This results in a complex whole.

Before I start with the model, I want to explain the background of the problem and discuss some different numbers of the pay gap. There are multiple researches on this topic. The European Commission publishes each year an Annual Report on Gender Equality.

The gender pay gap is the difference between men’s and women’s pay, based on average difference in gross hourly earnings of all employees. On average, women in the EU earn around 16% less per hour than men. But it varies from country to country. The gender gap is a complex issue caused by a number of interrelated factors.

I had a lot of difficulties with simulating all this information in one model, but finally I found a sollution by separating the different factors. This is possible because each of the findings I used are also split up, so there is no overlap.

Finding totally up-to-date information is not easy, so I took the data found by a report made in 2016 by ‘Instituut voor de Gelijkheid van mannen en vrouwen’, a Belgian institution who fights for equality between Belgian men and women.

The total pay gap in 2013 was 8,432 billion euros. This amount can be split up by different reasons:

- In combination with studies, retirement...: 7%

Related with experience and seniority, and the differences in generations. Older women are lower educated than younger women. Wages are increasing with age, for men and women. But the amount of changing depends on the sex. An explanation for this is the evolution of the carreer for men and women.

Education the grade of certificate also influence the pay gap.

To get an overview of the different variables, I first made a causal diagram: 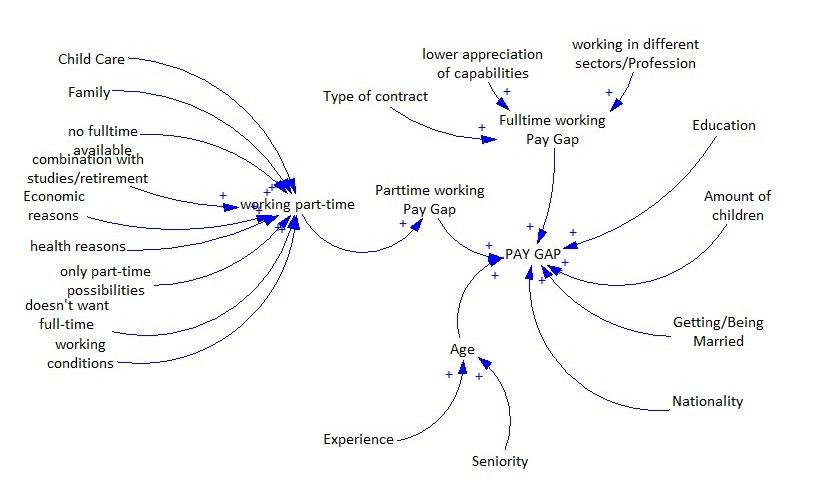 At the end of 2013, Belgium counted 5 676 207 women. I will use this number because the percentages are also from 2013. All the data used is completely split up for the sole reason so there is no overlap. To see which part of the pay gap is the biggest, I will divide the Gap the different causes of the gap.

I first did a simulation of everything how it is set, and we call this ‘Base’. We will use base to compare with the other data:

Pay gap is increasing with time, but that is not what we are researching. We will look at the differences of the pay gap when changing certain parameters. With the function SyntheSim I can now change certain parameters to see the influence of this on the total pay gap.

3. Increase pay gap per hour for part-time with 10%

4. Decrease pay gap per hour for part-time with 10%

5. Increase pay gap per hour for education with 10%

6. Decrease pay gap per hour for education with 10%

7. Increase pay gap per hour for civil state with 10%

8. Decrease pay gap per hour for civil state with 10%

9. Increase pay gap per hour for family composition with 10%

10. Decrease pay gap per hour for family composition with 10%

All the graphs increase or decrease in the same way and order. But some of them slightly more than the others. The increase and decrease of the pay gap for education has the biggest influence on the total pay gap. If you increase the gross hourly pay gap of this cause, the pay gap increases a lot. Followed by the cause Age. For decreasing we find the same conclusions. 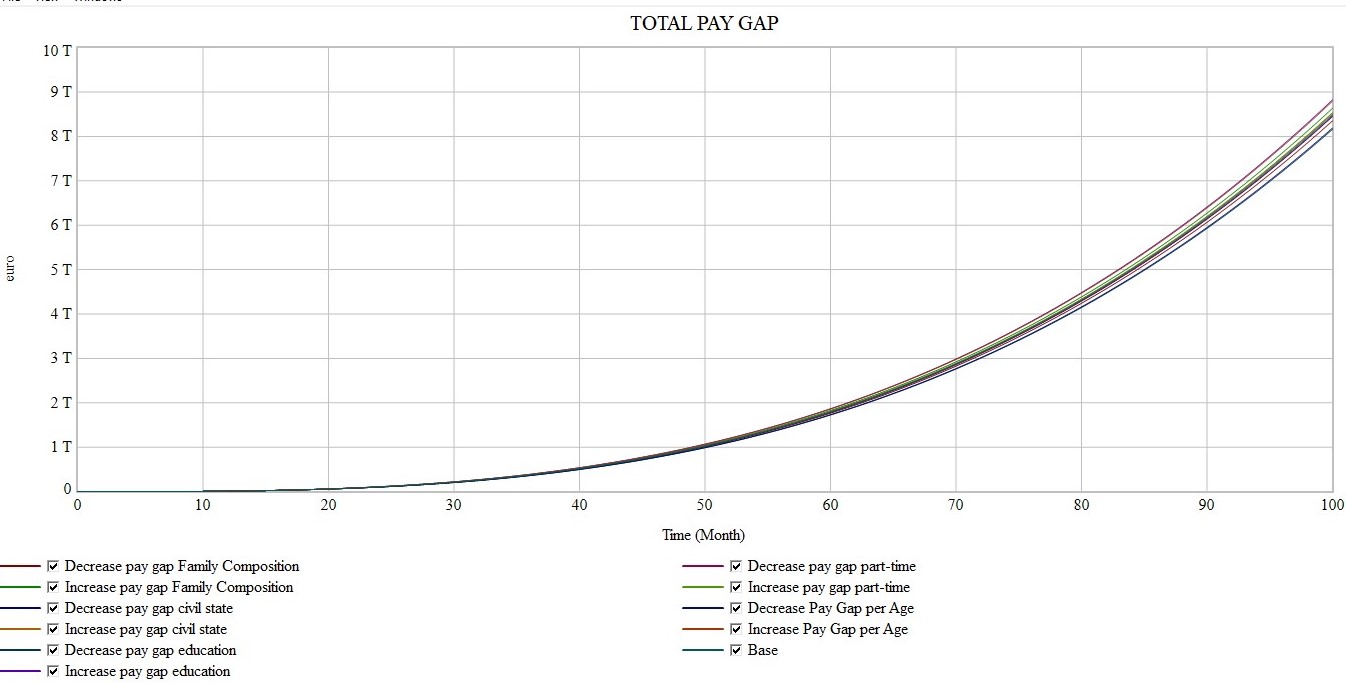 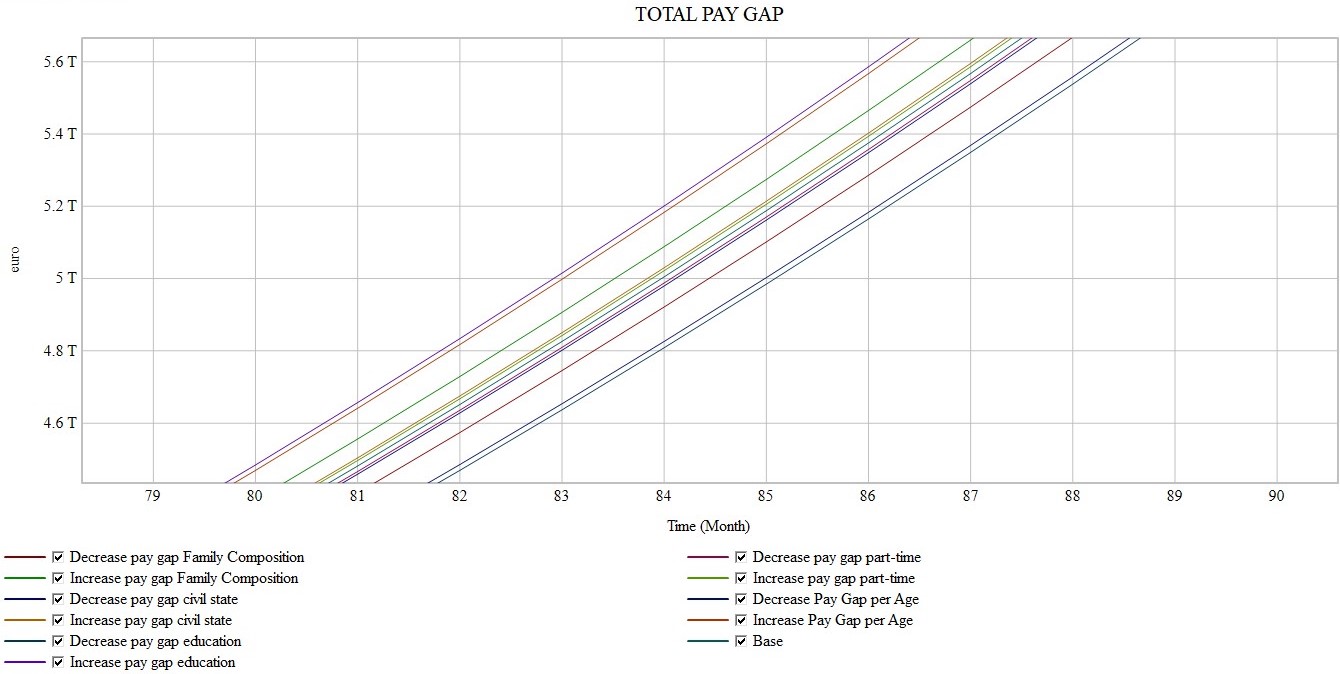 To check which of the factors within Education (high school, bachelor, master) has the biggest impact, you change each of the three factors separately: 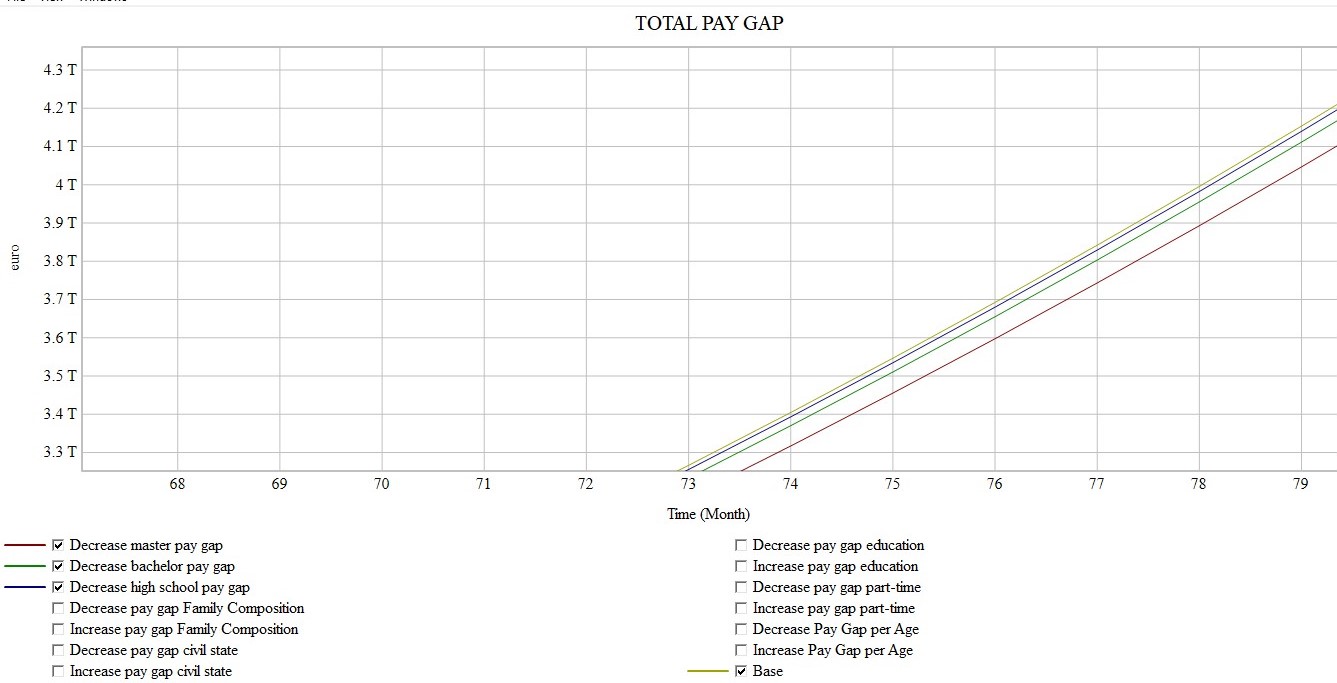 I can make a top of the best indicators to close the pay gap, to the smallest influencer:

The easiest way to start closing the pay gap for the government, is reducing the pay gap based on education. Especially for master certificates. This can be explained by the low amount of women having a top function. Changing this is a good start for closing the gap.