At the time I am working in an IT team of a start-up insuretech company that offers life insurance online and provides its clients with the application which makes a score of client’s physical activities - the more the client does sport the bigger cashback from the price of the insurance contract he can get. As that company is software-based, the IT team plays a big role, but unfortunately it did not have a proper process of solving business requirements. The following sections will describe the new process of a team (implemented recently) and the simulation is supposed to help to identify the bottlenecks of the process, meanwhile, the results from the simulation are supposed to help to come with the solution about the right distribution of the resources in order to boost the effectiveness of the team.

There are several possible solutions the management of the company is discussing:

The following model is supposed to help the author of this work to choose the right move.

Simprocess is a relevant tool for such kind of problem mainly because the aforementioned situation can be described as discrete. There is a clear entity (business requirement or bug) which goes through a series of operations (development process), it includes different type of events (delays, “fight” for the resources etc.) which creates queues. Simprocess and the process modeling also allows the author of this model to include decision points and define time delays by a probability distribution. The question stated in the problem section could be answered using different scenarios.

In order to create a Simprocess model, the author of this works has to describe the process of the given Development team, resources available, historical information available, and limitations of the model that the author included.

The main operation, in this case, is the procedure for registering requests. In this case, a requirement is understood as any formally described condition that the created solution must satisfy.

In particular, the requirements are:

Requirements can come from various sources, for example:

All the requirements are placed into Backlog in the Jira software tool and are monitored.

Resources in the simulation

The product owner is the first contact to deal with business requirements. He is in close contact with the analyst when it is decided that a task is ready for backlog (business case or cost-benefit analysis of new functionality is done; in case of defect management – bugs are either accepted or specified for the Debugging processes).

The analyst is available only 2 days a week

Techlead is able to solve Code reviews and Releases only 2 days a week, rest of the time is allocated to management activities and cooperation on the other projects.

Development process for the model

For the development process, the team has chosen the Kanban approach under the condition that the FIFO principle will be used (the first task in – the first task out). The following process describes all the phases from the moment the task was passed to the team to its release. 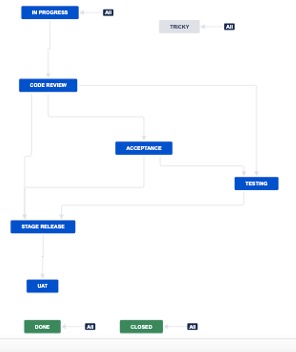 The team’s Kanban board includes 8 phases each task goes through:

Also, after agreeing on the new functionality, the Analyst updates the user documentation for the solution.

After the thorough analysis of the team the author of this work decided to create a model with the following presumptions and limitations:

Values in the model

For both of the generators, the author used the presumption of Poisson distribution 5 requests/day and 2 bugs/day that was transformed into Exponential distribution Exp(1.6) an Exp(4.0) respectively (with the time unit Hour). This estimation was done based on the data from 5.10.2020 - 2.1.2020 (90 calendar days) exported from Jira. The data had to be cleaned due to incoming requests on non-business days, statistical outliers ( days when somebody created a number of irrelevant to this model sub-issues or migrated a number of issues from the old backlog). From the cleaned data we can derive that the average and the variance of the final set of data are close enough, which were used as a hit to suppose that the distribution of this value could be considered to be Poisson distribution.

For the effective process of analysis and prioritization, the product owner collects several requests all at once and during meetings with the analyst explains the tasks for further specification. A value of 10 was chosen from the personal experience and intuitive estimation. The statistically derived value was considered to be irrelevant for the purpose of this model.

The time spent on analysis Exp (1) days for the batch from the Product owner was derived from the average time based on the usual process when the Analyst and Product owner have a 1to1 and the other day assigns the tasks to the team members. For the purposes of this simulation Analyst automatically moves requests to the backlog/ Kanban

Delay and forks in To develop / Code review / Testing/ Release

In this case, the name of the Delay function "To develop" is not the same as in the real Kanban board and serves as an actual process of development, while the number of the tasks in this activity symbolizes both backlog and task that are being developed at the same time. Exp (2) day was chosen because of the team policy to decompose the requirements into requests with the value of 2 to 3 MD. All of the following values are coming from the empirical data and interviews with the tech lead and tester who estimated the current effectiveness of the team as follows:

In order to answer the question stated in the first part there were run 100 replication of three scenarios of the simulation in the time frame from 1.1.2021 to 31.12.2021:

From the Default scenario, we can see that the analyst and tester are definitely not the bottlenecks of the process because their capacities are unused most of the time (apx. 50 % and 85 % respectively). For the management of the company it gives a clear hint that they can be used for the other tasks as well or the tasks are stuck somewhere else and the resources are waning for the previous process. (this will be covered by the other scenarios)

It is obvious that the main reason for the inefficiency of the process is that the entities are stuck and waiting for the developers.

In the next scenario, the number of Resources of the Resource type Full stack developer is extended to 12.

It is interesting to observe that extended number of the developers has just insignificantly impacted the result of the team.

And loaded the capacities of the testing by 1 per cent only.

Thus, both hypothesis from the previous two paragraphs were incorrect.

For the next scenario, one of the most potential developers was promoted to the assistant of the techlead and will be helping with the Code reviews and Releases. For that, simulations are run with 8 units of Full stack developer resource and 2 units for Techlead.

The result of this change was worse than expected. It did a minor change in the numbers of requests processed in the system, but even worsened the usage of the resources.

Learnings and the sessions for the team

Less obvious, but seemingly the most effective scenario is that the team has gone through the sessions on code clearance, business logic, and the check lists for the code review were created. In the model this situation means that the KPI for the probability that Code review was successful is set to 0.8 instead of 0.5. From the business point of view, it means that the KPI of the team is to deliver better code and reduce need for the rework.

For this 100 simulations are run with the value 0.8 of the connector Yes outgoing from the Branch Is the code ok? and value 0.2 for the connector No.

This move had several outcomes: 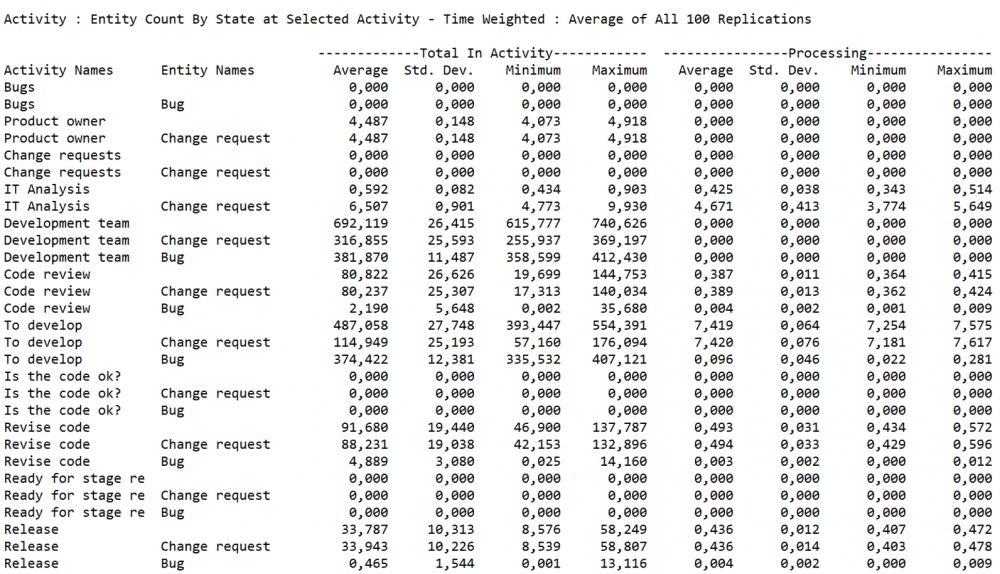 If answering the question from the main part of the Problem section one can state that the best scenario is the last one and the question is which activities can guarantee the KPI. Also, tester and analyst can be allocated to other projects to fulfill their capacity. The policy of Change request goes always first leads to huge technical debt, do another prioritisation policy should be found, but it was not the purpose of this simulation. I would like to emphasise that adding more resources is an obvious solution, but as simulation showed not effective one, even though it could be overseen by the managements effectiveness of the team is the main component.

PS. I was unable to upload three other scenarios due to the error This file contains HTML or script code that may be erroneously interpreted by a web browser. Therefore I am sending a link to the other scenarios that are placed on the Disk https://drive.google.com/drive/folders/1RW-cRiQVDGPxrkpDmBnFokCtI7nnbwEb?usp=sharing