Fish population is declining around the world due to excessive fishing and ignoring the limiting measures. The catch of may commercial fish species in the North Sea has decreased over the past decades. The most important measure is the total allowable catch, used by all the countries that can fish in the North Sea. We can use data from ICES (International Council for the Exploration of the Sea). The TAC gives for every sort of fish the total number of fish that can be captured by all the European countries together in an fishing area. The intention is to create a simulation of a fishing area and based on historic catches of a specific sort of fish, determine how much of this fish there can be captured every year before it becomes extinct. There are different factors that influence this : the number of fishing ships in the fishing area, the total number of this fish in the area, the procreation of this fish every year and the amount of fish every ship can capture every year depending on his capacity. First this is explained by a simulation where all these factors are known, and then is this model applied on the real data of the North Sea. We want to define when a fishing sort will soon become extinct.

In an investigation conducted by the Government of the Netherlands, based on the data from ICES in 2017, the number of the fish sort herring decreased since 1950 from 5000 million kg till 2000 million kg, a decrease of 60% in 65 years. This wasn’t a linear decline. Policy measures were forced to make sure that herring didn’t became extinct. The countries of the European Union have to follow these measures if they want that the population of herring won’t become in the danger zone. The goal of the simulation will be to model the long-term effects of declining herring population in case of ignoring the TAC measures and in case of accepting the TAC measures.

NetLogo 6.0.2 (2D) was the most appropriate software to illustrate this model.

The simulation is tailored to a study [1] by the Government of the Netherlands on 3 October 2017. It analysed the herring population in the North Sea from 1947 till 2017 and the catching fish in the North-Sea from 2002 till 2017. We created a fictive fishing area in the North Sea. We describe 2 models. First we start by ignoring the rules introduced by the government. We have an initial number of ships we can choose in the area, and each ship has a capacity to capture fish which can also vary. The number of herring is expressed in millions of kg. The number of fish in the area can be chosen. The ships and fish move random in the area and can’t leave. In this simulation, fish can only die when they are captured by a ship, they don’t survive by eating and can’t die another way, we didn’t introduce this because this was irrelevant to our model. The amount a ship can kill is depending on it’s capacity. A ship is full when his remaining capacity is zero.

The second version of the model shows us why it’s important that the TAC rules are implemented and why every country have to follow them in case we don’t want herring to become extinct. We introduce the TAC percentage, which we can choose. It describes the maximum percentage of fish we may capture in total and what happens to the population of fish if we accept this and don’t break these rules.

Represented as white fish. The agent is commanded to randomly move around in the simulation and reproduce at a certain level. They only die in case of capturing by a ship, it only happens once and that’s when the fish and ship are on the same position. They are expressed in millions of kg.

Represented as 2-sailed boats. Each ship kills according to the real data 12 million fish each tick and we consider a tick as one year, so each month 1 million, because most fishing ships have a capacity of 1 million kg storing space.

Visualization of the problem

In the model version, we can choose between ignoring the TAC rules and accepting the TAC rules. When we ignore them, we focus on the fact in which time and by which number of ships and their capacity herring will become extinct.

Adjusting the initial-number-ships slider shows us how drastically the number of ships can change the slope on the population plot.

Adjusting the initial-capacity slider also shows us how drastically the amount of capacity can change the slope. We introduced this slider because there are a lot of different capacities in reality, in that way we can use the software on different models.

Adjusting the fish-reproduce slider let us change the birth rate. A reproduction rate of 100% allows 1 kg of fish to create one kg of offspring. We calculated the birth rate by the data we got from the weight of a herring and the number of children. To yield best results the production rate should be set to 70%. We assume that half of the population is female and has more then one offspring, minus habitat loss.

The first simulation is useful because it helps to understand the observations of the past. It does not lead us to any new knowledge, accept from the fact that it was clear that some rules must be implemented, otherwise herring would be extinct already.

In the first scenario, we outline the situation from 1947 till the middle of the seventies. The population had shrunk extremely, that’s why the government decided to forbid the fishing of herring, this was a first big measurement. The calculated average percentage decrease in population was 98%, in average 25 years this makes a decrease of 3,92% annually.

Replicating these conditions, brings us in the situation starting in 1947. We now have a look at the population trend shown in the picture below.

This represents the situation after 20 years (ticks). The number of catched fish is 5438 and we see that the population is starting to shrink drastically. As we can see, there is still some fish in the sea, but there are too many ships for the fish to hide, so it’s only a matter of time till they get caught. This was the situation in the beginning of 1970. The graph follows the real graph of the herring population. The fish don’t get the opportunity to reproduce, so with the conditions given in 1950, the population is almost extinct after 20 years. That’s why in the beginning of the seventies there was a closure on the fishery of herring.

If these conditions continue, the extinction of herring is unavoidable. Keeping the same conditions constant from the prior model, this is what the population trend will look like.

It is not very different from the previous model. The remaining fish don’t get the opportunity to reproduce and get caught by the many ships. After 35 years (ticks), the population becomes extinct with these conditions (there is no fish left). The number of catched fish is 5534. This means that the population of herring would be extinct in the beginning of the eighties, if it wasn’t for the government measures in the middle of the seventies (closure on catching herring). Our software shows the same results as the observations of the past.

Due to the closure on the fishing of herring, the population got the opportunity to grow again. In 1983, when fishing on herring was permitted again, we found in the data that the population was 500 million kg. Step by step, ships started fishing on herring again, but there were still no rules implemented on the maximum catched fish. When we assume the starting conditions of 1980, we set the slider of initial number of fish on 500 million kg and the initial number of ships for example on 10 with a capacity of 1 million kg. After 11 ticks, we get the following results:

In approximately 10 years, we get a population of 1500 million kg. But from 1990 till 1996, there was overfishing again, because there were still no rules implemented.

In our software, we now use the model-version of accepting the TAC rules. The percentage changes every year, so we just observe the situation of 2017 and what the results are when we keep this percentage. According to our data, the initial number of herring in the North Sea in 2017 is 2000 million kg. The total allowable catch is calculated on 500 million kg, as we can see on the graph given by the Government of the Netherlands. That means that the TAC percentage is captured on 25%, so we can catch 25% of the population. If every ship has a capacity of 5 million kg, we calculate we need a 100 ships to catch this. We use the following model with the described assumptions above. 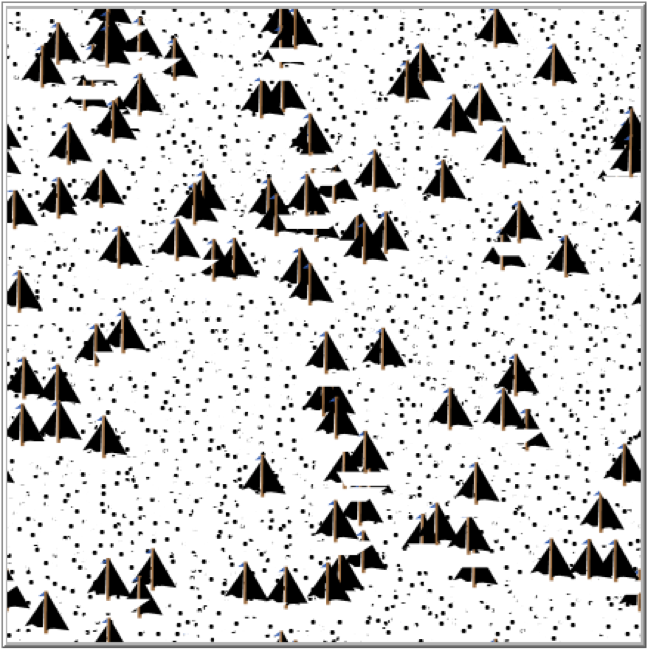 Of course there are still countries who don’t follow the EU recommendations. According to an article of J. Van Horenbeek in May 2017 [2], the percentage of overfishing is on average between 5 and 10 %. If we take the example of the Netherlands, who has an important share in the catch of herring in the North Sea, they catch 10% more than permitted. If we implement this in our model ( the same assumptions but with a TAC of 35%), we see that after 2 years the catched fish exceed the population.

This means that, if we still want to accept the TAC rules but with an overfishing of 10%, we should stop fishing until the population exceeds the catch and we reached the initial population again. Then we can start fishing again with a percentage of 35%. This happens after 22 ticks, so we have to stop fishing for 20 years, otherwise every country will catch more and more fish known in the game theory as strategy of the commons, till herring becomes extinct.

The plot that my simulation made for the decline of herring from 1947 till the seventies is similar to the one published by the Government of the Netherlands. We conclude that a prohibition on catching herring in the seventies was necessary, otherwise herring would be extinct in the eighties. Permitting fishing on herring in the eighties without decent measurements wasn’t very tactic, because after 6 years the population shrunk again very fast. This was a wake-up call for the government to intervene and since the middle of the nineties, the population of herring grew again. Every year, the percentage of TAC is calculated, and in 2017 this resolved in a population of 2000 million kg of herring in the North Sea, with a TAC of 25%. We simulated if we keep this percentage, the population won’t be in danger ever again and we can keep catching herring. If we exceed this percentage, the number of catched fish will be greater than the number of fish, which means we will be obligated to stop fishing for a couple of years till the population is restored again. If we want that the catched fish don’t exceed the population, we set our TAC on 33% if we have the assumptions of 2017, with a starting population of 2000 million kg. 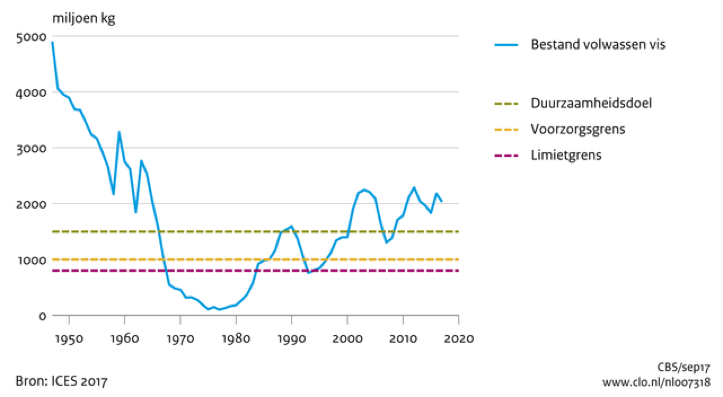