Systems archetypes are one of ten systems thinking tools. Systems archetype in general refers to „…recurring, generic systemic structures that are found in many kinds of organizations, under many circumstances, and at different levels or scales, from internal personal dynamics to global international relations.“ (Kim a Anderson 1998)

The Shifting the Burden archetype comes into play when a complicated problematic situation arises. The problem might be difficult to fix and it might also be hard to even identify the root cause of the problem. In such case people might be naturally inclined to apply temporary or more easily available “solutions” to seemingly fix the problem. However these quick solutions only fix the symptoms and not the root cause of the problem which means that even though the solution might be successful short-term, the problem will most likely manifest itself again later on or a completely new symptom might appear.

Along with the “Fixes that fail” and “Limits to Success” archetypes these are the three most easily recognizable archetypes in a real world. (Kim a Anderson 1998)

The first mention of the term “Systems thinking” comes from Barry Richmond who used it in 1987. (Arnold a Wade 2015) Richmond defines Systems thinking as “…the art and science of making reliable inferences about behavior by developing an increasingly deep understanding of underlying structure.” (Richmond 1994)

The art and science are composed of the parts shown in picture "Systems thinking structure according to Barry Richmond". 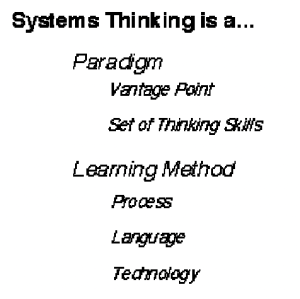 Richmond also adds that “…Systems Thinking is a Paradigm and a Learning Method. The first conditions the second. The second supports the first. The two parts form a synergistic whole” (Richmond 1994)

(Anderson a Johnson 1997) also add that systems thinking is in general characterized by the following principles:

The beginnings of the systems archetypes can be traced back to 1960s and 1970s when several recurring systemic structures were observed. In the 1980s these observations were properly described and diagrammed. (Kim a Anderson 1998) Peter Singe then referred to these structures as systems archetypes in his book The Fifth Discipline: The art and practice of the learning organization from 1990. (Kim a Anderson 1998; Senge 1990)

As mentioned earlier, Shifting the Burden begins with a problem symptom that we are trying to solve. At first we apply the easier symptomatic solution (B1). Afterwards the problem is seemingly fixed so there is no pressure or need to apply a better (fundamental) solution. The fundamental solution (B2) would however be more beneficial long term even though it is usually more time consuming and takes more time for the benefits to become noticeable (comes with a delay) as it would fix the root cause of the problem which would prevent the problem from happening again. With application of the symptomatic solution also comes a potential for side effects (R3) which make the application of the fundamental solution even more challenging. 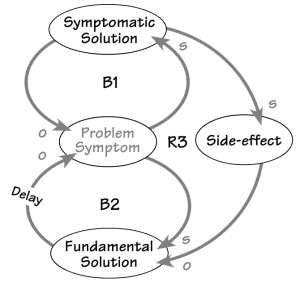 Structure of the Shifting the Burden archetype (Kim a Anderson 1998)

(Kim a Lannon 1997) also mention a possible development of the Shifting the burden archetype into an “Addiction” archetype where the side effects get so much out of hand that they overwhelm the original problem.

Life itself can get stressful due to various responsibilities (e.g. balancing work life, school life and personal life). The only logical solution that would solve the root cause is limiting the amount of responsibilities which can obviously be hard to do in certain cases. Some people thus try to mask the problem with medication or alcohol. This however does not solve the root cause and might cause more trouble down the road (addiction). (Senge 1990) The visualization of this example can be seen in the diagram "Diagram of shifting the burden with stressful lifestyle".

Diagram of shifting the burden with stressful lifestyle (Senge 1990)

Unhealthy lifestyle and medication side effects

People might have various health conditions. Some of them might be caused by unhealthy lifestyle which means that the correct solution would be to change the patients’ habits. This could take time and might be difficult to achieve because it requires will. Patients might instead get a prescription for various drugs that might alleviate the symptoms but they don’t fix the root cause. Eventually these drugs may come with side effects which would worsen the patient’s health and thus make it even harder to fix the unhealthy lifestyle. (Senge 1990)

In the eyes of wild animals, vegetable gardens are a great source of food. Many gardeners have most likely experienced that wild animals visited their garden and ate the plants. In this case, the wild animals are the problem. Gardeners then tend to apply various symptomatic solutions like repellents to try to discourage the wild animals from coming back. One logical solution is also putting up a fence around the garden. The fence might be great for bigger animals but smaller ones can easily get through the holes or dig a hole underneath. Fence also brings some side effects like extra cost or limited access to the garden for the gardeners themselves. In the case of the repellents, there are various types – scarecrows, noisemakers, pepper spray etc. The animals can learn over time that e.g. the scarecrow is not a real threat or get used to the other types of repellents. The repellents also bring various side effects like additional cost, time and effort to build and apply them etc. The solution that would address the root cause of the problem would be a removal of the wild animals around. That is obviously hard to do and would require traps or weapons. This solution might even be illegal in certain cases. Gardeners might also buy an animal that would be a natural threat to the wild animals, e.g. a dog. In this case one might apply both symptomatic and fundamental solution – gardeners can apply repellents and fence while also monitoring which wild animals destroy the garden before applying the correct fundamental solution.(We Are The Practitioners 2017)

A manufacturing facility has trouble meeting production targets because of changing production requirements. Due to this issue, employees from Research & Development team come and fix the problem. Since the symptoms disappear there is no pressure to fix the underlying problem. Because the R&D came to fix the problem, the production staff has received no training to be able to correct the problems themselves so they start to lose motivation and eventually leave. (Braun 2002)

The diagram for this problem can be seen in the picture "Manufacturing facility example shown in a diagram". 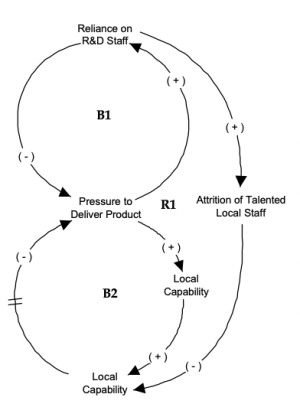 A refrigator manufacturer does not have enough engineers to work on a new product design. The company management knows that in order to be able to handle this issue internally, they need to hire more engineers. However they need to start working on new products immediately so they choose an easier option which is outsourcing (to Company A). The management then might initially put effort into fixing the root problem (lack of engineers in the company) but this effort will quickly disappear because Company A was able to fix that problem and at the time they feel like they would be better off putting the effort into other issues that need attention. This problem will obviously arise over and over again – everytime the refrigerator manufacturer faces a lack of employees. This will eventually lead to financial and performance difficulties. (Kim 1999) In this example (Kim 1999) also mentions the terms “reactive” and “generative” orientation. The efforts made by refrigerator manufacturer are reactive – they are trying to fix what is wrong at the moment. Instead the manufacturer should look into the future and have a vision of where they want the company to be. The company can then make efforts to fix the root problem and work on developing the necessary skill base inside the company while applying symptomatic solutions in case they encounter any issues. (Kim 1999) This once again shows that symptomatic solutions can be applied and are not always wrong but they have to be treated as such and efforts must be simultaneously made to fix the underlying root cause.

The diagram for this problem can be seen in the picture "Diagram of shifting the burden for the refrigator manufacturing company example". 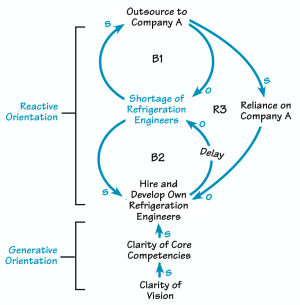 How to achieve leverage

In order to successfully deal with shifting the burden, it is important to pay more attention to the fundamental solution while weakening the urge to treat the symptoms.

“Without a clear and convincing picture in the manager’s mind’s eye (Personal Vision) as well as in the collective mind’s eye of everyone (Shared Vision), the pressure to go for the quick fix may overwhelm the manager, condemning her/him to a recurring pattern of interventions that aim to solve the same set of problem symptoms.” (Braun 2002)

One possible example comes from politics. It is hard for politicians to raise taxes because they will obviously face public backlash. This public resistance is created due to the perception that the government is corrupt. Therefore it is important to deal with the root problem which in this case would be to focus on the bad public perception and solve the corruption problem. (Senge 1990)

That does not mean that application of short-term symptomatic solutions is never correct. In some cases they are indeed necessary. For example when a person suffers from a bad health condition due to an unhealthy lifestyle, it is not strictly incorrect to treat the immediate symptoms. However it is important to acknowledge symptomatic solutions as such and do not treat them as long-term solutions. (Senge 1990)

Fairly similar to the “Shifting the burden” archetype is a “Fixes that fail” archetype since they both share a similar behaviour. (Kim 2015) The archetype will thus be shortly introduced as a possible topic for another work.

“A fix, effective in the short term, has unforeseen long-term consequences which may require even more use of the same fix.” (Senge 1990)

In a “Fixes that fail” archetype, there is a problem symptom that desperately needs to be fixed so a quick solution is applied to resolve the symptom, however unintended consequences of this solution only worsen the problem. The problem thus eventually comes back or becomes even worse. (Kim a Lannon 1997) 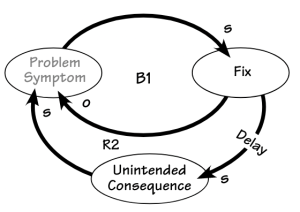 The picture "Fixes that fail archetype" shows a structure of this archetype.

This means that both of these archetypes make people rush a response to acute problems which leads to unintended consequences, although finding a fix for „Shifting the burden“ might be a bit more complicated since it requires a deeper understanding of the system and what needs to be done. (Kim 2015)

Seven steps for Fixes that fail as described by (Kim a Lannon 1997):

WE ARE THE PRACTITIONERS, 2017. Shifting the Burden — Systems Archetype 3. We Are The Practitioners [online] [seen 2023-01-02]. Available from: http://www.wearethepractitioners.com/index.php/topics/art-analysis/systems-thinking/Shifting-the-Burden