“An ocean traveler has even more vividly the impression that the ocean is made of waves than that it is made of water.”
― Arthur Stanley Eddington

System dynamics is a perspective and set of conceptual tools that enable us to understand the structure and dynamics of complex systems. System dynamics is also a rigorous modeling method that enables us to build formal computer simulations of complex systems and use them to design more effective policies and organizations. Together, these tools allow us to create management flight simulators-microworlds where space and time can be compressed and slowed so we can experience the long-term side effects of decisions, speed learning, develop our understanding of complex systems, and design structures and strategies for greater success.[3] 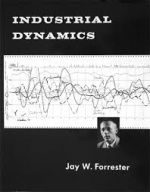 System dynamics was first developed by professor Jay W. Forrester at MIT as management method but it since gone on to be applied to all types of systems from modeling the dynamics of the Earth systems to those of the economy and political regimes.

In his work The Beginning of System Dynamics[4] we can go through all "turning points" in his life which led to the birth of the field. The first system dynamics simulation was made when he found himself in conversation with General Electric. That was paper-based inventory control system simulation about how inventories and hiring decisions affected the behavior of the entire system itself. In 1961 he wrote his Industrial Dynamics book, which still serves as a foundation for the field. "Within ten years of its publication, the span of applications grew from corporate and industrial problems to include the management of research and development, urban stagnation and decay, commodity cycles, and the dynamics of growth in a finite world." [5]

The Nature of System Dynamics

Before introducing the world of system dynamics, we should understand what we mean by the words "system" and "dynamics". System is a very common word, which is used in a lot of different environments. It is an interconnected series of pieces that work together to achieve some objective. And term dynamics is reffered to an active and changing component of the system. As a whole, system dynamics study how each part of system interact with other pieces and how they change in a certain period of time, it tries to model and understand the dynamic behavior of complex systems.

The question is why do we need system dynamics and system thinking? And the answer is not simply that world is changing faster and faster and things are accelerating. Everybody knows that. It’s despite all the tools and methods that we’ve got, all the analytic power and our cleverness, things are getting harder and harder. And more and more of the policies that we implement are failing to solve the pressing challenges that we face. [6]

MIT Professor John Sterman provides a very memorizable example of sytem dynamics and system thinking in his Open MIT course. By this example he is trying to describe the concept of the system dynamics that looks at a system as a whole in three picrutes.

We differentiate two views on the relation between System Dynamics and System Thinking:

With analytical thinking people tend to see the world in terms of linear cause and effect. There is always a beginning (cause/reason), middle and the end (consequence). For example, most people think in linear, nonfeedback terms and they say: "I know my goal. I want a car". This goal motivate their decisions: "I buy a car". And these decisions changes the state of the world : "Plus one person in a world with a car".

The outcome from this open-loop is that problem is solved, they reached their goal. However, this is how they tend to think. And this way of thinking is wrong, because they can not know what decisions to make only with the knowledge where they want to be. They have to also know where they are right now. There has to be a feedback.

System thinking looks through the interplay between elements that is a feedback loops, through which elements are interconnected, affecting joint outcome. [8]

Feedback loop in a complex system.

As with the example with the "decisive" senior manager, let's have a look at our ploblem from the more complex perspective. The picture above shows us the feedback loop interconnection beween the state of the system and decisions to make. However, it shows only intended effects of people's decisions, but does not capture the unintended "side effects" of the system. Consequently, it represents only a small piece of the system, which can be called as your mental model. Mental model has a very limitted view on a system dynamics, it just covers effects that you are accounting on and everything else is going to manifest as a so-called "side effects". There is no such thing as side effects in reality, they are just effects you did not think about in advance. Usually, these effects are going to feedback in the way which is opposite to your goals.

Much more interesting is that you are not the only player in the world. Other people has other goals and their goals and decisions affect the entire system as well. 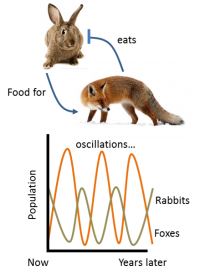 A causal loop diagram is a simple map of the system with all its consistent components and their interactions. By capturing interactions and, consequently, the feedback loops, a causal loop diagram reveals the structure of the system by understanding not only the structure of these relations, but also the nature of those relations. It becomes possible to model and simulate a system's behavior over a certain period of time. These feedback loops can then behave of two different kinds: either positive or negative

A positive feedback loop means that values associated with two nodes within the relation both change in the same direction. So if the node, in which loop starts, decreases, the value associated with the other node also decreases. Similarly, if the nod,e in which loop starts, increases, the other node increases also. Economy of scale is a an example of a positive feedback loop betwen customers and business. The more products company sells, the more revenue it receives from its customers, giving it more to invest in scaling-up production. Thus allowing it to reduce costs, which in turn means more customers will purchase the product and so on. This is also called virtuous cycle, where when one party gains, the other does so also. Of course, this can not go on forever, and that is why positive feedback loops are typically associated with unstable processes that are likely to crash in sometime.[8]

A negative causal loop means that two nodes change in opposite directions. If the node, in which loop starts, increases, then the other node decreases and vice versa. The system dynamics between predators and prey is an example of a negative feedback loop. If the number of predators increases, then the number of their prey will decrease, which in turn will feedback to affect the predators by reducing their population, which again will feedback to increase the prey population and so on. Negative feedback loops are typically associated with an overall stable and sustainable patterns of development.

To perform a more detailed quantitative analysis a causal loop diagram is transformed to a stock and flow diagram, which helps in studying and analysing the system in a quantitative way, typically through the use of computer simulations.

A stock is a term for any entity that accumulates or depletes over time. This is a simple variable. A flow, in contrary, is a rate of change in a stock. So an axample of a stock can be a water reservoir (in our case it can be a glass of water). It is a store of water and we can ascribe a value to a volume it contains. Now if we put a tap on one side of the water reservoir and start to pour a water, this could be an example of a flow. Whereas a stock variable is a measure of some static quantity, a flow variable is measured over an interval of time. [9]

To sum up, System Dynamics approach can be applied everywhere, where the system exists. It can be a powerful tool for analysis as well as for basic understaning of the system behavior. In the framework of the Simulation of Systems course, System Dynamics tool can be used to test and improve mental models and structures via computer simulations.

“Everything must be made as simple as possible. But not simpler.”
― Albert Einstein

Excercises and Questions for revision