Twitter Inc. has been recently sold for $44 billion. There has been information going around which says that the new owner basically had to buy the company due to potential legal issues which raises question whether the company is profitable enough.

The goal of this simulation was to determine whether the purchase of this company has been wise from the financial point of view.

Input data from the simulation were obtained from Twitter's official earning results and other popular websites. After the data were obtained, necessary information was calculated (distribution, average annual return/net income/net loss, standard deviation). Since Twitter was founded in 2006 and the earliest verifiable data were from 2012, there is obviously a bigger uncertainty compared to S&P500 (mentioned later) which has been around for more than a century.

Twitter's historical market cap changes have been used as according to sources market cap is commonly used to determine a company's worth. There are 3 possible market cap changes simulated – average (based on historical data), optimistic (double the average annual return to see a possible outcome in case the company is able to miraculously perform way better) and pessimistic (a little less than average annual return in case the company is doing even worse). Historical quarterly net income and loss have also been simulated just to see in more detail how the company is doing.

The expected profits were compared to S&P500 which is a popular stock market index tracking performance of 500 publicly traded large US companies and a popular investment option. Just like with Twitter Inc., average annual return and standard deviation were calculated based on historical data.

Although the data doesn't precisely follow one specific distribution (there are some outliers), based on the plotted graphs the normal distribution was chosen for the simulations as it's probably the distribution the data follows the closest.

In the first picture below there is a distribution of Twitter's historical annual market cap changes data.

In the second picture below there is a distribution of S&P500 historical annual return changes data.

In the third picture below there is a distribution of Twitter's historical quarterly (which were later converted to annual) net income changes data. 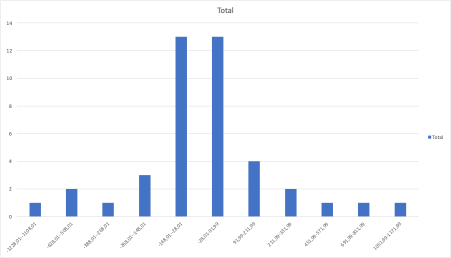 The predicted results after 1 000 simulations for an initial investment of 44 billion USD (=44 000 million USD) – average expected value in 10 years, probability of loss and minimum and maximum amounts in the simulations are listed in the table below:

At least from a financial point of view it seems that Twitter has not been a very smart investment. Based on historical data, Twitter Inc. has hardly ever been profitable and even looking at the simulations, it seems very likely that the company will not be making money unless changes are made and compared to the S&P500 stock market index, the changes would have to be very positive to outperform the index.

Even in the optimistic case, there is a pretty high probability being worse off than keeping the money (predicted value below the initial investment). The average and pessimistic cases are essentially a coin toss when it comes to being worse or better off + they perform noticeably worse than S&P500.

S&P500 has a low probability of loss (being worse off than the initial investment) and the expected profits are better than in case of Twitter Inc. The new owner would have to basically double the market cap change up to now to outperform S&P500 but on the other hand there is a higher chance of loss since the company simply has not been around long enough to have enough historical data to make assumptions from.

Even if we look at the simulation of a predicted net income (starting at 0 USD) in 10 years based on 2 000 simulations:

We can see that there is a high chance that Twitter will suffer a net loss in 10 years (as it has been pretty much consistently since its inception).

Looking at recent information about new changes in the company like laying off a lot of employees, new Twitter subscription possibilities etc., it's obvious that the new owner is trying hard to end this trend and make the company start earning money.