Every year, the price of real estate in Prague increases rapidly. As a result, citizens can no longer afford to buy an apartment in the center of Prague and have to move to smaller villages and towns around Prague.

Therefore Prague becoming very inaccessible to ordinary citizens and, due to a large financial profit, has become popular field for wealthy investors and developers.

The purpose of this simulation is to show trends and development of prices for flats, houses, and other real estates in Prague for the next ten years based on real historical data available on the Czech statistical office. The aspects which are taken into count are the influence of the investors, mortgage rates, population, lack of flats.

The picture shows the development of the price of apartments in Prague from the beginning of 2014 to the end of 2020. During this time, the price of real estate has increased by an incredible 84%.

A detailed procedure for solving individual problems is described at the selected variables below. The Vensim tool was chosen for solving this simulation, because it is ideal platform for longer-term simulations

The final picture of the model:

Initial value is based on data from the Czech statistical office and it is set to 0.0105. [3]

Initial value is based on data from Czech statistical office and it is set to 0.0105. [3]

Population growth in the Czech Republic. Calculated over the equation: Natality * Population * Immigration

Population decrease in the Czech Republic. Calculated over the equation: Mortality * Population * Emigration

The government's intervention will increase inflation very noticeably, especially in times of pandemic. Therefore, its value is set to 0.31

Lack of flats increases their prices. The significance coefficient is set to 0.9.

An abundance of flats decreases interest in flats increases their price. The coefficient factor is set to 0.2.

Investors' interest in flats increases their price. The coefficient factor is set to 0.55 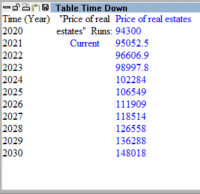 To interpret the results, I put two graphs and tables with resulted data. The first graph shows the development of the population in the Czech Republic. By 2030 we can expect in Czech Republic almost 11.2 billion inhabitants. This result is mostly given by the huge amount of immigration from eastern Europe because the mortality and natality in the Czech Republic are on a similar level. This graph was not the subject of this work, but it is an interesting secondary output.

The second graph and table describe the main purpose of this work, the trend and development of real estate in the next ten years. That is, from 2020 to 2030. The graph and table provide the result data according to this simulation. As is obvious from the table, the final price per square meter in Prague will be 148,018 Kč in the year 2030. Compared to the initial value from 2020, this is an increase of almost 57%.

To conclude the achieved goals of this simulation, the trend of the recent years of real estate prices in Prague is increasing rapidly. In the fact,the most in comparison with all other European cities. As it follows from this simulation, the estimate of a price increase of 57% for the next 10 years. This prediction is still very modest, also due to the economic crisis. In ten years, this simulation can be compared with reality, and as the author of this study, I believe that the percentage increase will be even higher. For investors and ordinary citizens, investing in the purchase of an apartment in Prague is not only a suitable means of protecting money against inflation but even a means of getting rich.