Random numbers are useful for a variety of purposes, such as generating data encryption keys, simulating and modeling complex phenomena and for selecting random samples from larger data sets. They have also been used aesthetically, for example in literature and music, and are of course ever popular for games and gambling. When discussing single numbers, a random number is one that is drawn from a set of possible values, each of which is equally probable, i.e., a uniform distribution. When discussing a sequence of random numbers, each number drawn must be statistically independent of the others.[1]

This chapter aims at explaining why it's hard and very important (besides interesting) to understand how to get a computer to generate proper random numbers. Since most of currently used security and encryption standards depend on random numbers, it is easy to imagine that by selecting not secured algorithms causes many aspects of our digital lives to become exposed to clever programmers and companies interested in data analysis or less legal practices (identity theft, surveillance, bank fraud and so on). One must realize that the privacy of for example all their banking activities, email communication, social networking and so on heavily depends on randomness in applied security mechanisms.

In cryptography, a pseudorandom generator (or PSG) is procedure that outputs a sequence computationally indistinguishable from truly random sequence with uniformly distributed random sequence. The prefix pseudo (from Greek ψευδής "lying, false") is used to mark something as false, fraudulent, or pretending to be something it is not. Pseudo random generators find application in many fields besides cryptography such as applied mathematics, physics and simulations. Simulations often require mechanisms producing sequences of random values. These procedures are certainly non-trivial and often require significant amounts of computational time.

A pseudorandom generator (or PRG) is a (deterministic) map

is the 'seed length' and

is the 'stretch'. We typically think that

is efficiently computable in some model. If

is any 'statistical test', we say that G '

denotes a uniformly random string in

is called the 'seed'. If

In other words we are trying to convince any outside party (let's call them an adversary) that sequences returned from PRG are being produced chosen at random. Adversary may use statistical test algorithms to check simultaneously outputs from PRG and uniformly random sequnces. PRGs ensure that both outputs look the same to the adversary..

Reliable PRG should have all these properties[3]:

Unbiased - Uniform distribution
By definition of the word unbiased this property states that PRG is showing no prejudice for or against something. In PRG language this means that all values of whatever sample size is collected are equiprobable. This property ensures the independence of the generator and its stability against certain types of attacks.

Unpredictable - Independence
It is impossible to predict what the next output will be, given all the previous outputs, but not the internal state. If this is not guaranteed then basically anyone can pose as a generator. This is used for example in the man in the middle attack.

Unreproducible
Two of the same generators, given the same starting conditions, will produce different outputs. Certain types of spoofing attacks try to reproduce subset of real production environment in order to exploit the lack of security in respect with this condition.

Long period
The generator should be of long period because this property directly influences the randomness of generated outputs. This is crucial for example for simulations since they are conducted in order to simulate dynamic behavior and states of an environment not only the cyclic stages of an environment.

Fast computation
The generator should be reasonably fast. It is always a good idea to take care about the users of the generator since they might be in a quite constrained environment either by hardware specifications or by expected time performance.

Security
The generator should be secured. Basically, security of the generator ensures that no one can break the generator in reasonable time either by the brute-force approach or by more clever ones. If there is no polynomial-time algorithm that on the first

output sequence can predict the

bit with probability greater than 0.5 we consider the generator to be secured.

On the other hand pseudorandom permutation is any function defined over Failed to parse (unknown function "\textnormal"): {\displaystyle {{\textnormal(K, X)}}} :

. This situation is depicted below:

The adversary can not distinguish whether output came from

is indistinguishable from random

Linear Congruential Generator (or LCG) is one of the best known PRGs in the world. This generator is defined as follows

are integer constants that specify the generator.[5]

The range of output values is restricted since after at most

An example of output exported from WolframAplha application[6]: 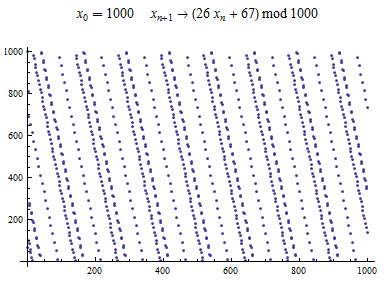 Multiplicative Congruent Generator (or MCG) is simplified version of LCG since if c = 0 in LCG we get the MCG[5]. This generator is defined as follows:

An example of output (of 59-bit multiplicative congruential generator) exported from WolframAplha application[7]: 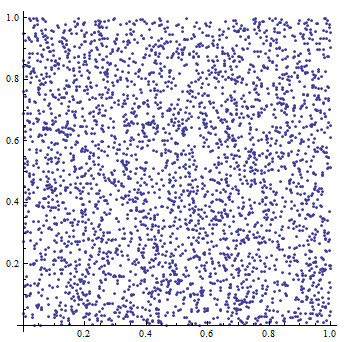 Lagged Fibonacci generator (or LFG) is one of the fastest PRGs providing long period. LFG is defined as follows

and the sequence is defined by

For generator to work,

values in a lag table. In order to achieve the maximum length of the period and fair degree of randomness parameters need to be set in the following way:

producing the length of the period for

An example of an output[9]:

Mersenne twister (or MT) is one of the modern implementations of PRGs and it provides very high quality of peudorandom numbers. It was developed by Makoto Matsumoto and Takuji Nishimura in 1997 with the aim of replacement of some known faults of older PRGs. MT is founded on a matrix linear recurrence over a finite binary field. Nowadays, the most used versions are MT with 32 and 64 bit word length. Due to optimizations applied to MT it is optimized to be used in Monte Carlo method simulaions in many fields of science.

Since the description of algorithm is quite , I would like to point the readers to this paper from George Mason University where the internal mechanics of MT are explained in detail. 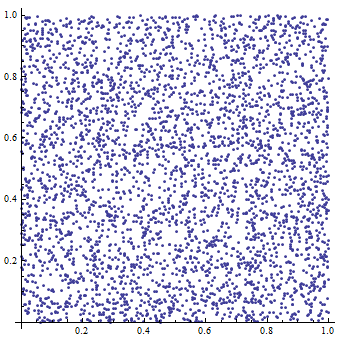 Blum Blum Shub (or BBS) is PRG developed by Lenore Blum, Manuel Blum and Michael Shub in 1986. It is defined as follows:

BBS does not find application in simulations due to its running time. On the other hand due to it's security properties it is appropriate for use in cryptography.

Very important concept to ensure reliability and determine possible areas of use is testing PRGs. There are many tests for PRGs. First of all let's take a look at bacis catogories of tests.

These tests aim at detailed study of internal structure of a PRG, its parameters and inner workings. They are typically used when theoretical concepts of PRG are publicly known. From cryptography we know that best way to test any security concept is to assume that adversary already knows the structure and inner workings of tested concept so we rely on complexity of the math backing this concept.

These tests aim at:

Sometimes adversary does not have an access to the used PRG or simply cannot determine what kind of PRG (if any) is used. In these cases adversary uses another approach and tries to determine the PRG by supplying certain groups of parameters and analysing and testing provided result sequences. Result analysis is based on finding similarities and patterns in result sets. In case of less secured PRG the adversary is able to determine just by doing that, whether they are interacting with PRG or truly random function. An adversary might be able to determine a kind of PRG or even the concrete implementation based on the randomness of gathered outputs.

These tests aim at:

Lets assume that a secret message has been prepared by converting the letters into digits following the rule:

, then cipher for plaintext AB is:

3. Which required property of PRG is not fulfilled based on the following output from a generator:

for MCG defined as follows:

5. Categorize test based on its description.

Birthday spacings: Choose random points on a large interval. The spacings between the points should be asymptotically exponentially distributed. The name is based on the birthday paradox.