In previous chapters of Game theory we introduced One-shot games like Prisoner's dilemma. In other words situations when we are allowed to do one action that result in some outcome (payoff). For example a situation when someone wants to enjoy fast car ride. If he drives really fast he enjoys fast ride and he´s happy but he also rist that police will catch him and arrest. So he must choose between driving fast or not fast according to his ulitily from one decision. But in the real world we often meet situations that repeat or their consequences affect other situations. We can say that our live is set of games in some order and we are playing them. And all of us know that this games, this situations repeat very often. We go to work every day or go shopping for example. Sequence of games that affect other games and are played by the same players is called repeated game. [1]

We can say that every human is rational and follows his own profit. That in other words mean that a person should not have problem with betrayal of other person to get higher payoff. But what if game continues and this betrayal can be avenger? Under these circumstances is the first person willing to betray the second in the first round? It depends on the situation. It depends on the payoff. So we can say that in a game of various number of persons we can achieve cooperation for a time that players benefit from cooperation.

Game theory is often quoted by politicians to gave their opinios seriousness and as a way how to look smarter that they are.[2] And it is also a great example of repeated game. Politicians like senators often vote about laws they propose. Options for the vote are support or not to support. If the vote was only a matter of good proposal/bad proposal, politicians would vote exactly the same. But because they follow their own goals the vote depends on many different things. Lets say that senator A propose a law that after the adoption brings a great popularity to him. But he needs senator B to support his proposal. So he asks senator B for support and he agrees only on the condition that he will in return later vote for his proposal. Regardless of what they promised to each other they now have several options. Senator B can vote for proposel and than expect support for his proposal or defect already in round 1, gain some profit from senator A not having that popularity but senator A will be probably angry and not support his proposal too. If he chooses to support him now have senator A some options. He has gained popularity for his law proposal and he can now return the favor or betray. Remember he already gained popularity so he can make additional profit from betraying his opponent. But if he do so he can probably expect revenge every time he wants to cooperate with senator B. There will be surely more voting in the future so what is the best strategy to maximize the payoff? That is the knowledge we gain from studying repeated games.

The Evolution of Cooperation

The evolution of cooperation can refer to:

Game theory and mathematical analysis of behaviour have gained great popularity mainly due to a period of the WW2 and the Cold War. In 1944 John von Neumann and Oskar Morgenstern published famous Theory of Games and Economic Behavior. [5] This book explained how to use game theory for analyzing and developing optimal strategies for military, economy and other purposes. The Cold War was also a great period for game theory usage. US government funded teams that should analyze possible strategies and practices against the enemy. There were two hostile countries capable of total destruction of each other. This state is from view of game theory incredibly interesting. Lets assume the situation that one side lauches nuclear rockets. Rockets gonna hit targets in minutes so second side of conflict has the opportunity to launch counterattack. But it is really necessary to launch nuclear attack? In few minutes they are gonna be dead anyway so they don´t have to care what will be after them because even their children will be dead. So retaliatory nuclear strike would only killed milions of people. So what is the point of launching it? Revenge? And if not, what is the point of even having nuclear weapons? The fact is that not having the opportunity to fatal strike is already case of loosing in the Cold War. Many people today agrue if one of side would actually use nuclear weapons in no matter how escalated situation. Reason to have nuclear weapons is most definitely the threat. But what is the point of threat if our enemy know that we are not gonna use them. Well the enemy must not know this. That is the reason why US presindents and high-ranked military officiers were instructed to act on public a little "crazy and insane" to prove that they will launch the attack no matter what.

Robert Axelrod and his tournaments

In 1981 Robert Axelrod published article dealing with the fundamental question: When should a person cooperate, and when should be person selfish, in an ongoing interaction with another person? He used a simple way to represent the type of situation that gives rise to these problems. He explained everything on the particular kind of game called the iterated Prisoner´s Dilemma. [3]

In the same year Robert Axelrod also held a computer tournament in which 15 different strategies for repeated prisoner's dilemma, sent by leading game theorists, competed with each in the game of 200 routes (total of 15 × 15 games). Payout was always calculated as the sum of the basis matrix: [4]

Strategie in the tournament

In addition to the strategies Always Cooperates and Always Defects Axelrod divided strategies used into the following groups: [4]

To the great surprise of all participants gained the most points very simple strategy "tit for tat" , which sent Anatol Rapoport a psychologist and expert on the game theory.

tit for tat - In the first round cooperates and in other rounds repeats the move of opponent.

The game is played for a finite and known number of rounds, for example, 2 rounds/repetitions. 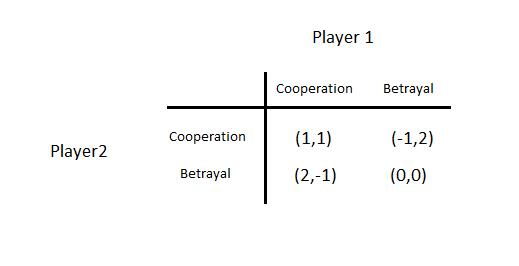 What happens if this game was played T < ∞ times? We ﬁrst need to decide what the equilibrium notion is. Natural choice, subgame perfect Nash equilibrium (SPE). Recall: SPE ⇐⇒ backward induction. Therefore, start in the last period, at time T . What will happen?

The game has no predetermined length. Players act as though it will be played indefinitely or it ends only with some probability. This type of game is interesting but unlike finitely repeated they are not rare. How often we find a situation that we know exactly when it gonna ends and what it will be like? On the other hand, we routinely play many games that are infinitely repeated. Our goal is to find subgame perfect equilibrias in these types of games.

Because we eliminated backward inducion from the model, now we can see that under these circumstances (neither player knows when the game ends) cooperation (strategy vector {N,N}) becomes the equilibrium solution for both players. As we know the solution is always not only one. In this case there is more equilibrium solutions and we call this Folk Theorems. [1]

Unlinke finitely repeated there are many possible strategies to play. We discussed some of them above in the article. Lets just sum well-known strategies for repeated PD: [6]

(action profiles at all periods before t), and the set of all period-t histories is

A pure strategy for player i is

Note: this summation is well defined because

The term (1 − δ) is introduced as a normalization, to measure stage and repeated game payoffs in the same units.

In infinitely-repeated games we can consider trigger strategies. [1] [7] A trigger strategy essentially threatens other players with a “worse,” punishment, action if they deviate from an implicitly agreed action profile.

is the implicitly agreed action profile and

is the punishment action.

This strategy is non-forgiving since a single deviation from

induces player i to switch to

Suppose this game is played infinitely often. Is “Both defect in every period” still an SPE outcome? Suppose both players use the following non-forgiving trigger strategy s∗:

Lets show next that the preceding strategy is an SPE if δ ≥ 1/2 usingone-stage deviation principle.

Suppose that there has so far been no D. Then given s∗ being played by the other player, the payoffs to cooperation and defection are:

. This shows that for

, deviation to defection is not profitable.

Suppose that there has been some D in the past, then according to s∗, the other player will always play D. Against this, D is a best response.

This argument is true in every subgame, so s∗ is a subgame perfect equilibrium. Cooperating in every period would be a best response for aplayer against s∗. But unless that player herself also plays s∗, her opponent would not cooperate. Thus SPE requires both players touse s∗.

Example that we have 2 companies that want to launch a new product. The product is similar and they can launch it the same day because it is from the same chinesse factory. So the volume of sales will be determined by price. Companies have 5 days until product launch and every day they can reveal their price to the market at the same hour. Lets find NE.

Due to backward induction we know that after last day there will be no punishment for not cooperating. So last day both companies choose {B,B}. Forth day they know that they will choose {B,B} last day and again choose {B,B}. And this state continues every day till they reach first day again with NE strategy {B,B}.

The police is trying to enforce speed limit at some specific location with this payoff matrix:

t > 0: Play Not enforce if all previous outcomes were (Not speed, Not enforce). Use the mixed strategy q* otherwise

t > 0: Play Not speed if all previous outcomes were (Not speed, Not enforce). Use the mixed strategy p* otherwise

The pair of strategies is SPE