A Stock & Flow Diagram (SFD) is similar to a Causal Loops Diagram (CLD) though provides a more rigourous representation. Both diagrams belong to the chapter System Dynamics. System dynamics is an approach to understanding the behaviour of complex systems over time. It deals with internal feedback loops and time delays that affect the behaviour of the entire system. What makes using system dynamics different from other approaches to studying complex systems is the use of feedback loops and stocks and flows. It depicts the structural understanding of a system - the causal structures that produces the observed behavior. It reveals information about the rates of change of system elements and the measures of the variables of the system.[1]

By explicitly identifying Stocks - reservoirs which change over time, and Flows, which are responsible for changes in Stocks, the resultant insight explicitly depicts the manner in which things change.

Stock & Flow Diagram i based on Causal Loops Diagram and captures: 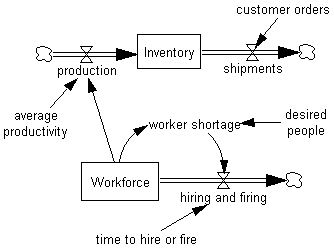 System structure is defined by:

Each graphical tool for modeling System Dynamics has its own form of symbols, but basics are same in the following points. [2] [3]:

-– These capture the “state of the system”

-– Mathematically it can be called as “state variables”

–- There are no inputs that immediately change stocks

The Critical Role of Stocks in System Dynamics:

There is a list of common examples of Stocks:

All changes to stocks occur via flows. In turn, stocks in a system determine the values of flows.

–- e.g. Incidence Rates is calculated by accumulating people over a year, revenue is $/Time, water flow is litres/minute

–- Can be estimated for any point in time

There is a list of common examples of Flows [x]:

Examples of Stock and flows

The following illustration shows the graphical implementation of symbols for one inflow to one Stock in software VenSim.

Both sources and sinks are assumed to have infinite capacity and do not impose any limitations on the flows. Clouds are drawn as the part of the flow element, in case the flow does not flows in/out of some stock.

Auxiliaries are used to define some intermediate concepts. Auxiliary can change instantaneously according to the specified formula.

– Can be reused at many places

Link is used to define a dependency between elements of a stock and flow diagram.

If some element A is mentioned in the equation or initial value of element B, you should first connect these elements with a link going from A to B and only then type the expression in the properties of B.

Each progress of simulation can be displayed into several charts that show the change in variables for example change in time. Once the simulation run is completed, you can look at the results of your simulation. The most basic and often most useful is the strip graph - See the following figure. 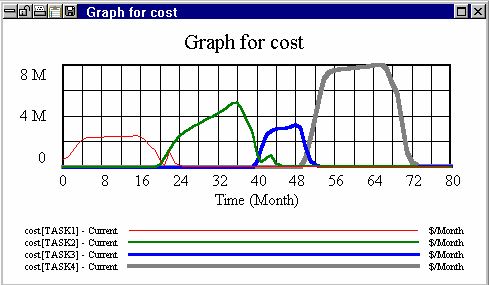 The time axis for the graph follows the global Start time and End time, but is rounded to even numbers. The Graph tool displays single or multiple variables on a single graph. It is useful for getting the big picture of a number of variables, and for printing presentation.

Each software tool for modeling the system dynamics allows you to set different settings for charts as a:

The Table tool is very good tool, which is included for example in VenSim[5]. It can generate a read-only table that you can scroll to review values. The resulting table displays numerical values for variables and their causes or uses. The Table tool's most common use is for detailed analysis of a narrow time range, but it is also good for displaying a lot of values on the screen and also for displaying arrays of data at a given time.

The Stats tool is also included in VenSim[6] and it provides summary statistics on the Workbench Variable and its causes or uses. This tool provides a quick statistical overview of the values for a variable. The following figure shows the population statistics.

There are a lot of software designed for modeling System Dynamics. An extensive list of programs can be found to be on this Wiki page. But the most used software are these:

Convert the following model in the simulation environment VenSim. 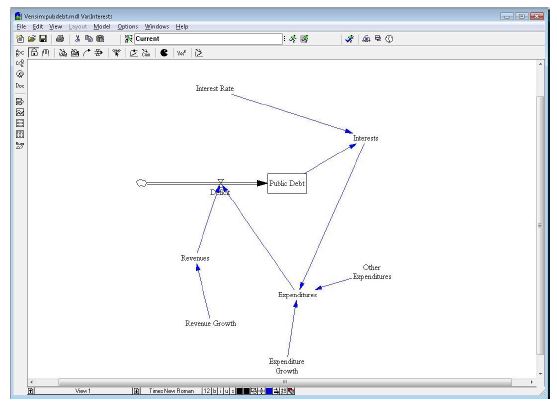 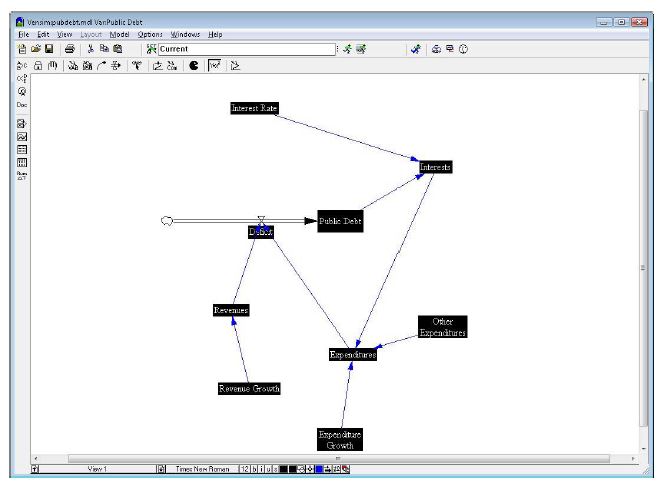 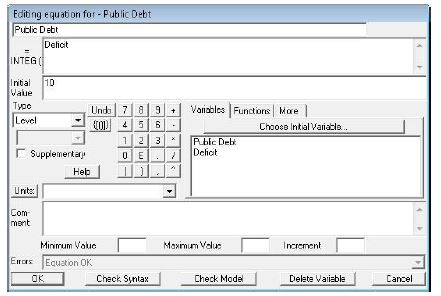 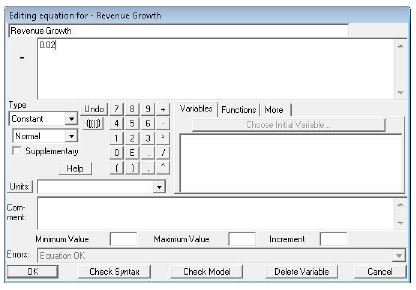 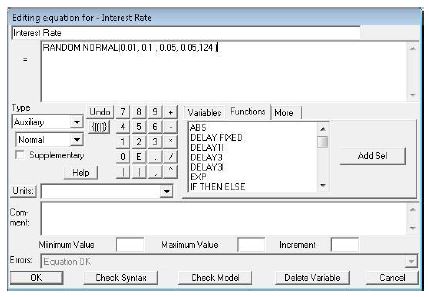 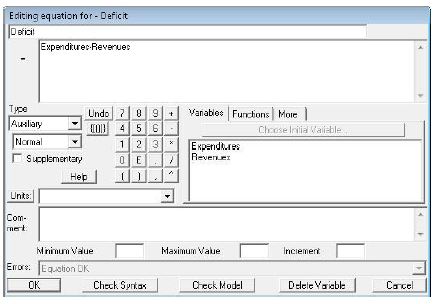 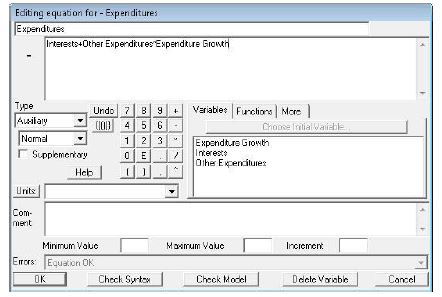 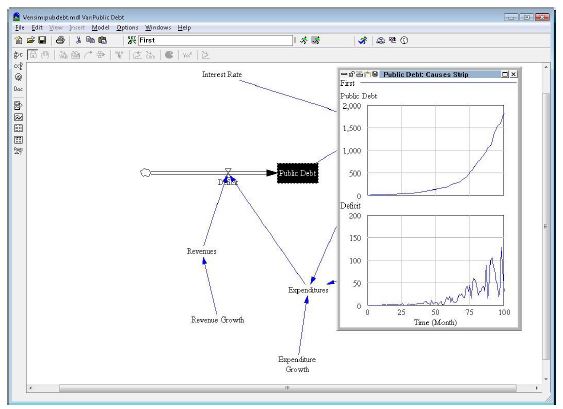 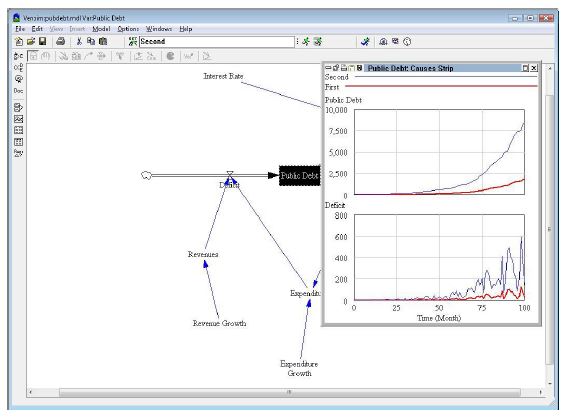 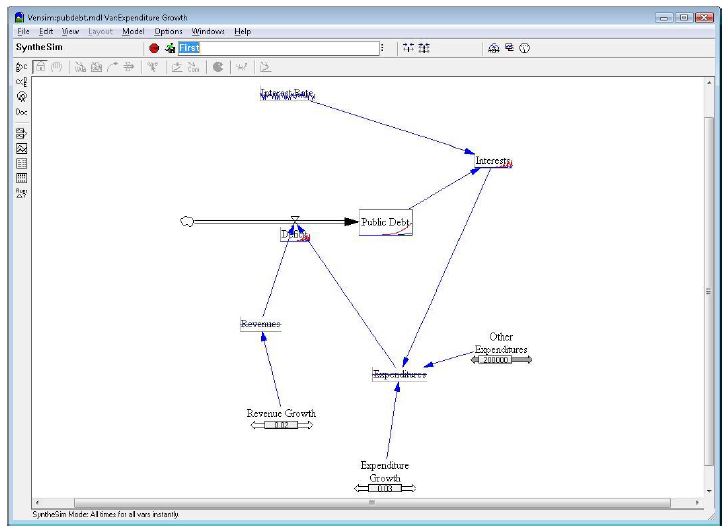 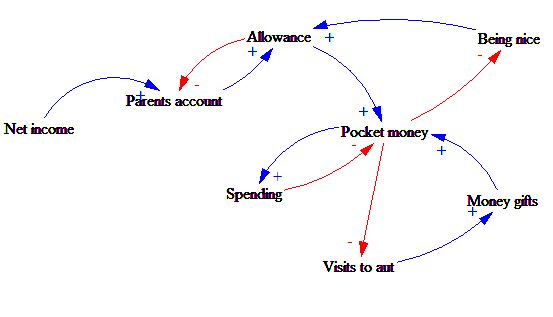 Create Casual Loop diagram, then convert it to Stock and Flow diagram:

A manufacturing firm maintains an inventory of finished goods from which it ships to customers. Customer orders are filled after a delay caused by order processing, credit checks, etc. Map the stock and flow structure, drawing on the following variables: Inventory, Raw Materials, Production, Order Backlog, Order Rate.

Create working simulation based on following proposal of Stock and Flow Diagram and equations.

Create working simulation based on following proposal of Stock and Flow Diagram and equations. 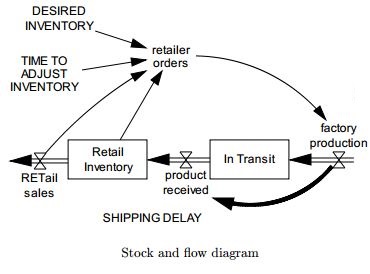