System archetypes are the patterns of behaviour that we can find in complex systems. Patterns help us to get an idea of how a particular system works. Even though each system is different, and at first look it may seem unique, but it is possible to find some similarities - repetitive structures and principles of how systems work. System archetypes help to find and identify these similarities. If we know the principle how the system works, we can better understand it and explore its weaknesses.

System archetypes, that are part of systems thinking and System Dynamics, is used to detect patterns of behaviour of social systems (businesses, communities, states, economies, etc.). They can be used in two areas, namely as a tool to determines the current state - a diagnostic tool or as a tool to look at the future development of the system - a prospective tool. As a diagnostic tool helps managers to obtain the perspective of the internal structure of the system, its functioning and help them to get a better idea of the current system state. As a prospective tool it is mainly used for planning. Managers can formulate their future goals and with the knowledge of the functioning of their organization, they can better determine the procedure by which this goal can be reached [1].

Archetype, also called prototype, represents a typical example, ideal type or perfect example. Archetype can also be a symbol or a recurrent motif occurring for example in literature [3].

To recognize the fact that the archetype is suitable for such a situation can be helpful the Family tree of system archetypes. Family tree is an ordered tree that based on simple questions is capable of directing the user to select the correct system archetype for concrete application.

This loop is based on the previous one, except there is a delay, which plays a role in overall system responsiveness. The combination of the negative feedback and the delay in the system creates oscillations. The system is trying to achieve the target state, but because of delay, the system detects the information later. The system thus exceeds the target state.

Main character is an oscillation which is created by combining of two balancing loops with delays. One loop reaches the desired state, and the target state of the second loop moves and that in turn influences the first loop. Both loops never reach their goals together and constantly oscillate around their target states.

Example: Examples may be currency market. Currency prices on the stock exchange is determined by supply and demand. When the offer price is lower than the price that buyers are willing to pay, then the purchasers buy larger amount of the currency. The seller realizes that the price is lower than it might be, and thus they increase the price, it will discourage potential buyers and the price will again gradually decrease below what buyers are willing to pay. The whole process is continually repeated and price oscillates around an equilibrium market price.

It is relatively simple archetype, in which two balancing loops are connected, but in this case there are no delays. Loops stand in opposite of each other and the effort made by one loop cause impossibility to balance the second loop and vice versa.

Example: An example might be a company that offers trips to the sea. The company decided to offer an additional service to its customers. Due to additional service costs of tours increase and the final price of trips will be higher than before. Next season customers begin to migrate to the competition, and the company decides to reconsider its initial plans and choose a compromise solution. The original goal has not been met and there has been erosion of targets.

This archetype is built on two or more interconnected loops. Increasing the target value in one loop tends to increase the second loop, and possibly other loops. The loops have a negative feedback. Due to the relatively higher value of one loop the other loops values grows. In the system as a whole, the target values continuously increasing in a cycle. Growth of the values can only be stopped by external constraints such as economic constraint, time constraint or space constraint.

Example: A typical example is the arms race. One country considers that it is threatened by another country. The first country raises its arms capacity and it forces the other country to also expand its weapons facilities. This again creates concerns among the first earth and once again raises his arms capacity, and the whole cycle repeats. Stop the escalation of the situation usually only lack of resources on one or both sides.

Archetype is a combination of stabilizing and reinforcing loops. Stabilizing loop trying to reduce the gap between current and desired state. The difference between these states is solved in a way which does not eliminate the problems. This solution only delays the inevitable result and situation as a whole is even worse. The more often undesirable states are solved by an intervention which does not remove the problem, the faster the actual solution gets more difficult.

Archetype captures the situation when dealing with a problem is solved only by temporarily solution. This short-term also affects the fundamental solution. Attention is given only to short-term solution or a solution which solves only side effects. 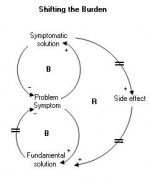 Example: An example may be the treatment of serious illness. The patient's doctor prescribes for example medication which only relieve pain caused by serious illness. Patient for a short time period feels better, but subsequently his condition gets. Disease gets to an advanced stage and it is significantly more difficult to cure it than at the beginning.

Reinforcing Loop is the second of two basic archetypes. It serves as a building element, which appears in the other system archetypes. Reinforcing Loop describes a situation where there is a persistent increase or decrease. This loop always leads to a unidirectional development. It is basically the exact opposite of the Balancing Loop.

Example: An example might be a savings account, which is initially deposited by an amount. The account offers a constant interest rate. After each crediting of interest, the originally deposit increases. In the next period the interest is calculated based on higher amount of money. This situation, however, abstracts from the inflation.

Example: A practical example might be global population growth. The population is bigger, it grows faster, but the faster it grows, the more resources it needs for its development. Demands on resources disproportionately increases in comparison with available resources on the planet. Growth is limited and cannot be infinite.

Example: A good example might be a company represented by its owners and top managers. Owners and managers have a common interest, which is the prosperity of the company. Even though they have a common interest, the interest of each party can be dispersed by other factors. Managers, for example, want to gain bonuses for their performance so they try to artificially inflate the growth and performance of the company. Owners may actually want to realize their short-term gains and thus can choose to pay disproportionately large dividends. This behaviour lead to the fact that the teammates become opponents and their behaviour does not lead to a single common goal.

Success to the Successful

This model consists of the two Reinforcing Loops which has mutually opposite tendency. One loop is growing and the other declining. The more one loop grows, the more the second loop decreases and vice versa.

Success to the Successful [5]

Example: A practical example is Self-fulfilling prophecy. Imagine two people, a confident, successful, another vice versa lacking confidence and success. These two people are constantly reinforcing that there are those who they think they are, and the gulf between them constantly increase. First self-confidence person is going better and better which gives him the courage to push further, the second person on the contrary, confirms that he fails and his self-esteem drops.

Tragedy of the Commons

Tragedy of the Commons is a situation where two or more parties fighting for a common and limited resource. The fewer the resources left, the more they try to get the share. 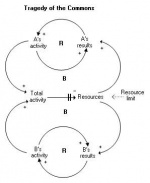 Tragedy of the Commons [5]

Example: An example might be global fight between various states and corporations about limited oil resources - oilfields. The less new oilfields appear and the faster the current are depleted, the more resources and effort is devoted to extraction. Due to limited resources and shrinking the whole situation escalates further, the situation is tense and there is more conflict and these are more serious than before.

Archetype is derived from the Limits to Growth archetype. It is extended by the fact that it is listed more than one threshold. Whereby the limits may not be as big and does not have to limit the same parameter. The basis in this model are the Reinforcing Loops, which is identical with that appearing in the Limits to Growth archetype. Loop strengthens and accelerates time to grow. In the model, there are also Stabilizing Loops that will bring the current state of the coasts. Balancing act with a delay, thus it is possible to establish a short-term imbalance that is gradually stabilized.

Archetype based on the Limits to Growth archetype. The difference here is that the limiting factor or factors dynamically develops along with the development of the entire system. Limitations are therefore not constant, but varies in time. The model shows the system which not enough to invests to itself and create its own limitations in future growth. Archetype is comprised of three loops, two Balancing Loops and one Reinforcing Loop.

Example: An example from the life may be preparation of high school student for study at university. If the student does not pay sufficient attention to current high school studies, he can thus create restrictions of his future potential. For example, he will not be accepted to university which he wants to or will be dismissed because does not manage to keep pace with other students. Neglected the study of lower grade may bring future constraints in a higher degree.

Growth and Underinvestment with Drifting Standard

Archetype based on previous archetype, which is enriched with fourth loop. The fourth loop represents a certain standard, which change over time and reduces the need for future changes. Overall, this tendency leads to the overall growth of the system decreases.

Growth and Underinvestment with Drifting Standard [5]

There are correct answers from quiz hereinabove.