Tragedy of the commons

The Tragedy of the Commons is one of system archetypes. It is an economic theory describing a system with shared resource where the actors act independently according to their self-interest. Draining of the resource can cause their actions to behave contrary to the common good. The Tragedy of the Commons became well known after an article by ecologist Garrett Hardin was published in 1968.

You live in a smaller city where you own some land. As a landowner, you have the rights to use the water pumped up from wells on your land. Whenever you are in a need of water, you go and get it. As your family grows, you naturally need more water. But it's just few more people and there is enough water in your well. There are many other landowners in your city and each one manages his own water consumption. As your city and its population is growing, water usage rises as well. What you may not realize is the fact, that all the water from different wells throughout the whole city is part of a regional groundwater aquifer, so each landowner is pulling water from the same pool. After continual long-term growth of the water consumption, the city’s water supply reached levels that left the aquifer vulnerable to saltwater intrusion from the nearby ocean. Now the city is facing potential water shortages and possible destruction of the renewable water resource the city depended on. [2]

System Archetypes describe common patterns of behavior that we can find in complex systems. They are part of a larger topic of System Dynamics.

There is a number of different System Archetypes. Yet there are two basic structures and all the other archetypes are different combinations of the two. The two basic structures are The Balancing Loop and The Reinforcing Loop. The Balancing Loop represents an objective not yet met, referred to as a gap between the current state and a desired state. It is common for balancing loops to have one or more delays. For example, there is usually a delay after a change is introduced and before it starts having a visible effect. The Reinforcing Loop promotes an effect or action. An example can be a savings account in which the interest earned is added to the principal, which itself earns more interest, which adds to the principal, and the cycle repeats. [3]

The Tragedy of the Commons

The Tragedy of the Commons provides unique insights into the effect that an un-systemic approach to organizational structure can have on overall, long-term performance.

The commons is something or someone that presents a common resource. It can be various natural resources. In an organization, it can be people, material, space, tools, etc. It can be anything, that is simultaneously made available to multiple people (or teams in organization).

Each person or team claims their share of the commons within the context of the goals and objectives that they have set for themselves. They regard the commons as being uniquely available for their own purposes. Although their lack of awareness of the demands others place on the commons are not the result of thoughtless disregard, the effect on the commons is the same.

As each person or team increases their demands and expectations of the commons in the name of their own goals, the commons gets under steadily increasing pressure to perform. In the case of commons such as materials or space, there is no conscious awareness of increased demand, but the concrete, physical limitations have no elasticity, and the satisfaction of people or teams placing demands on the commons erodes.

This archetype identifies the causal connections between individual actions and the collective results (in a closed system). It hypothesizes that if the total usage of a common resource becomes too great for the system to support, the commons will become overloaded or depleted and everyone will experience diminished benefits. [4] 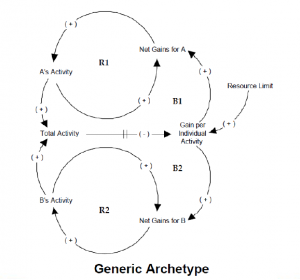 The Tragedy of the Commons [4]

Any time a declining trend is seen in the overall performance of each part of the system even as it increases its demand on common resources, there is a good possibility that a Tragedy of the Commons is taking place. This is often accompanied by puzzlement, as each party placing demands on the system cannot understand why their demands are not being met, which typically results in the party increasing its demands yet further. This may continue until the commons collapses. [4] 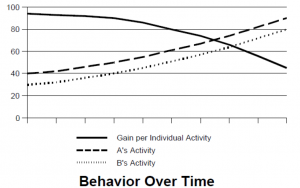 The Tragedy of the Commons: Behavior Over Time [4]

There can be several consequences as aggregate performance of the commons falls. Here are possible consequences of the problem in an organization:

There is a group of problems for which The Tragedy of the Commons can apply. Those are the problems that have no technical solution to them. A technical solution can be defined as one that requires a change only in the techniques of the natural sciences, demanding little or nothing in the way of change in human values or ideas or morality. A member of this class of problems is the population problem. The desired solution for the population problem is one that avoids the evils of over-population without giving up any of the privileges we enjoy. This solution cannot be found, the population problem cannot be solved in a technical way. An agreement needs to be created, which proposes a change in the current behavior. [1]

The System Archetypes are highly effective tools for gaining insight into patterns of behavior, themselves reflective of the underlying structure of the system being studied. The archetypes can be applied in two ways - diagnostically and prospectively.

Diagnostically, archetypes help managers recognize patterns of behavior that are already present in their organizations. Archetypes are also useful prospectively for planning. As managers formulate the means by which they expect to accomplish their organizational ends, the archetypes can be applied to test whether policies and structures under consideration may be altering the organizational structure in such manner as to produce the archetypal behavior. If managers find this to be the case, they can take remedial action before the changes are adopted and embedded in the organization’s structure.

The archetype can be used to help connect the long-term effects of individual actions to the collective outcome, and develop measures for managing the common resource more effectively.

Prescriptive Action can consist of these steps:

Seven Action Steps can be as follows:

In many respects the Tragedy of the Commons is a classic example of reductionistic thinking.[4] 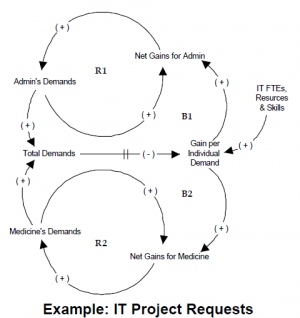 The Tragedy of the Commons: Example of IT Department as the Commons [4]

There are two parties that place demands to the IT department – Admin and Medicine. As net gains for Admin or Medicine grow, their demands for IT grow and the total number of demands to IT grows. As the total number of demands to IT exceeds the capacity of the IT department, its efficiency falls. Total demands either need to be reduced or IT resources raised. Either way, some kind of coordination and agreement needs to take place.

Now the exercise will be similar to the example above. You are an Admin in a company and you place demands to the company’s IT department. As your productivity rises, your demands for IT rise as well. There is marketing department in the company that places demands to IT as well. 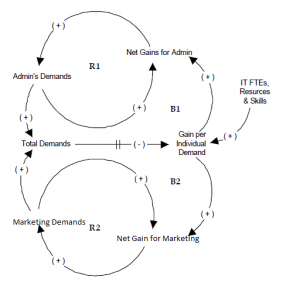 The Tragedy of the Commons: Exercise 1

The Tragedy of the Commons: Exercise 2
Retrieved from "http://www.simulace.info/index.php?title=Tragedy_of_the_commons&oldid=12897"